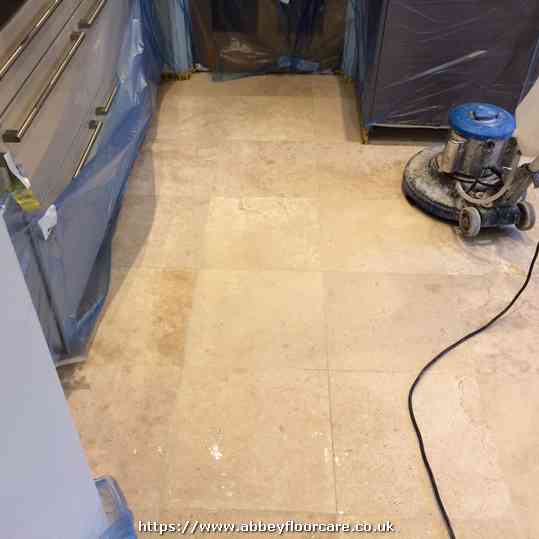 What To Do Next

Exactly Why You Can Count On Abbey Floor Care

Contact Us Now! It is quick to arrange a quotation for your stone floor cleaning Inverclyde. 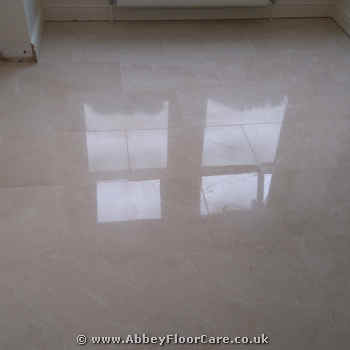 Marble ultimately looses its original finish. The dull appearance is brought on by microscopic scratches on the surface of the tile where it has been walked over. Marble Polishing is the best way to bring back the initial shine.

We use industrial diamond polishing equipment to restore the original luster.

It is practically unachievable to lay a marble floor really flat. The only method to make a marble floor smooth is by grinding away the lippage and uneven edges of the tiles. You must have specialized machinery and several years of hands on experience to grind and hone a marble floor, but the result is gorgeous.

Following grinding, the marble tiles and the grout will be at the exact same level. The marble floor will get the appearance of being just one piece of stone.

It is less of a challenge to clean a smooth, sleek marble than an uneven floor. Also, soil doesn't get stuck in the grout lines. Marble floor restoration generally involves a few crack and chip repairs, using marble fillers. Once we assess your floor, we will advice he ideal marble restoration process.

Find out about our Marble Polishing Greenock services and also our entire professional cleaning  work or Book a Quote. 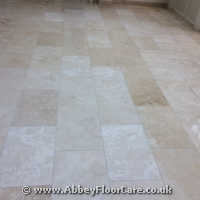 A Travertine floor is a kind of Limestone. There will various kinds of Travertine floor tiles, including tumbled, honed and polished. As the travertine wears, the hole filler falls out, and the holes fill with unsightly dirt and soil.

Working to the highest standard, Travertine floor restoration businesses use use a variety of machine scrubbing, hand scrubbing and pressure rinsing to eliminate old sealers and ingrained soil.

After cleaning, the Travertine floor could be grouted to refill any open holes. After cleaning and grouting we apply durable sealers. 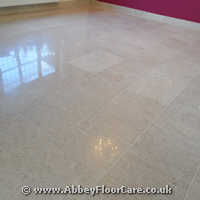 Limestone ultimately looses its initial appearance. The damage to the surface is due to traffic scratching and etch marks The only way to revive the original finish is through polishing the tiles. We utilise industrial-grade machines and industrial diamond tooling to grind, hone and polish the stone.

If your floor has been put down with not level tiles, this really is known as “lippage”. The only way to make a Limestone floor smooth is by grinding away the lippage and irregular edges of the tiles. Grinding Limestone should really only be completed by experts. The Limestone will have a monolithic appearance as a single area of Limestone.

Following grinding, the Limestone tiles be flush with the grout. It is less of a challenge to mop a smooth, sleek Limestone than an irregular floor. A smooth surface Limestone floor won't have grout lines to hold grime. Limestone restoration commonly features some crack and chip repairs, using Limestone resin fillers. We can advise the appropriate restoration service. 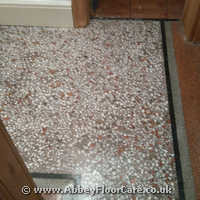 Terrazzo is a nice-looking yet hard wearing flooring, hence its popularity as a flooring in supermarkets, airports, commercial and industrial buildings. The initial finish on a Terrazzo floor will progressively go dull. The surface damage is due to wear scratches and surface damage.

The only way to revive the initial finish is through polishing the Terrazzo to the highest standard. We use diamond polishingto restore the initial Terrazzo shine. Once your Terrazzo is cleaned and polished, we are able put on a sealer that protects against day to day spillages. 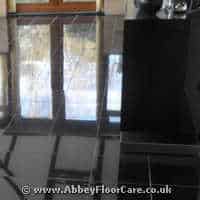 Because of its hardness, granite requires expert restoration. We offer a complete selection of granite cleaning, polishing, restoration and sealing services. to the highest standard. 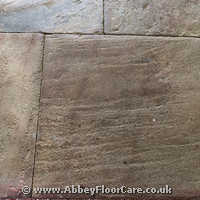 Sandstone is made of compressed sand, together with different minerals such as quartz and feldspar. Old sandstone can be covered with a number of old sealers and trapped soil, so ultimately, it needs expert cleaning and sealing.

We use a rotary brushing equipment, coating removers and pressurised rinsing to clean the sandstone Following cleaning we use hard-wearing sealers. Once we inspect your floor, we can advise you the best restoration process. 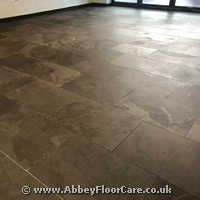 Slate is a wonderfully functional material that can be protected with a range of finishes including rough texture, smooth honed or polished finish. We have been mostly called to clean slate when it has layers of old coating with embedded soil, and so the finish appears dull and dirty.

We use rotary scrubbing equipments and sealer removers clean the slate. After professional cleaning we apply hard wearing sealers.

If you have got the right slate, it may be ground smooth, which makes it better to clean. 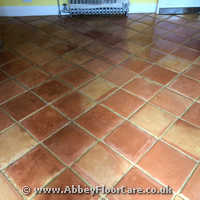 Regardless of its vulnerabilities, Terracotta may be restored back once again to a wonderful finish.

We could re-wax the Terracotta or put on a hard-wearing synthetic sealer that is much easier to take care of. 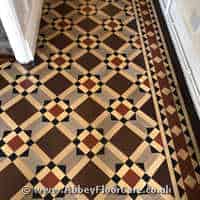 The tiles are unglazed from the natural colours of the clay used in their manufacture.

With the variations in residential decoration, these kinds of floors get underlay from carpet, lino, bitumen and other glue deposits.

After cleaning, the original colours in the floor can appear dull, so we use a colour intensifying sealer to revive the original . A topical sealer or wax finish can give the floor tiles with a low-sheen finish. 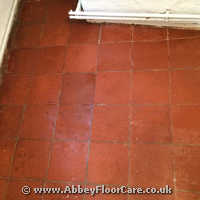 Quarry tiles are very durable although they still have problems with a couple of issues.

Damage to the surface of the tiles like scratches along with other abrasions can happen if the tiles haven’t been correctly sealed or perhaps the existing slealer has worn away.

While the tiles may appear soiled and discoloured, they’re surprisingly robust and could look as good as new after an effective clean. After cleaning, the tiles can be protected with a long lasting sealer. 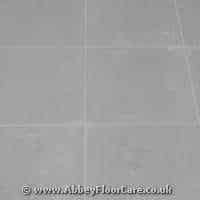 When the blend of ceramics isn't correct, the top of tiles can be porous. just like natural stone floors. This soil can be tough to remove.

We are able to get rid of embedded dirt with equipment designed to get into the microscopic pits where the soil is held.

After cleaning, we apply specialist Porcelain sealers to prevent this problem.

Solid color Porcelain can be ground and restored like Granite or Marble. 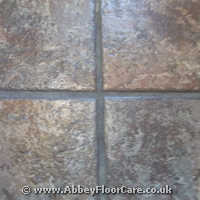 Once your ceramic tile is cleaned we'll put on a sealer. A sealed floor is easier to keep clean and the sealer helps stop stains.

Find out more about our Ceramic Tile And Grout Cleaning Greenock cleaning method in addition to our wide-ranging professional stone floor cleaning treatments or Book a Quote employing a business that works with the highest standard in natural stone.

There in many cases are aspects of natural stone restoration during natural stone cleaning. Natural stone floor restoration involves a range of services. Stone and tile floors have problems with traffic wear and damage, because people wander on them. In most cases, soil, spillages and traffic scrapes ruin floor's finish, subsequently the significance of stone restoration. Highly polished floors like Marble, Granite and Terrazzo show wear sooner as the polished finish dulls from foot traffic marks. Permeable natural stone and tile sealed with a surface sealer will gradually suffer scratch damage.

Grout is normally the most sensitive element of a natural stone installation. Cementatious grout is generally softer than stone and much more susceptible to abrasion and chemical deterioration. Stone restoration more often than not requires some crack and hole repair.

Etching and scratches are generally removed by grinding and honing. Natural stone can be ground to reveal a fresh finish.

On marble, Granite, Terrazzo, Polished Limestone and Polished Travertine floors, the highest standard natural diamonds are used to get rid of the surface wear and recover the initial gloss. The polish on Clay, Honed Travertine, Honed Limestone, Sandstone & Slate tiles is established using a gloss sealer. Sealer stripping chemicals are used to clear away all traces of the old sealer, and then a new gloss-finish sealer is applied.

Stone Floor Cleaning Inverclyde
And Throughout The Country

Together with the East Renfrewshire and Renfrewshire council areas, Inverclyde forms part of the historic county of Renfrewshire, which currently exists as a registration county and lieutenancy area  located in the west central Lowlands .

It borders the North Ayrshire and Renfrewshire council areas, and is otherwise surrounded by the Firth of Clyde .

Inverclyde was formerly one of nineteen districts within Strathclyde Region, from 1975 until 1996 .

Prior to 1975, Inverclyde was governed as part of the local government county of Renfrewshire, comprising the burghs of Greenock, Port Glasgow and Gourock, and the former fifth district of the county .

Its landward area is bordered by the Kelly, North and South Routen burns to the southwest separating Wemyss Bay and Skelmorlie, North Ayrshire, part of the River Gryfe and the Finlaystone Burn to the south-east .

It is one of the smallest in terms of area 29th and population 28th out of the 32 Scottish unitary authorities .

Along with the council areas clustered around Glasgow it is considered part of Greater Glasgow in some definitions, although it is physically separated from the city area by open countryside and does not share a border with the city .

The name derives from the extinct barony of Inverclyde 1897 conferred upon Sir John Burns of Wemyss Bay and his heirs .

Polishing Travertine Does Not Have To Cost The Earth 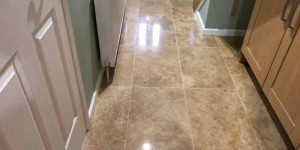 After 10 years, and a previous polish, in places, the shine was starting to wear. The Travertine also had a few visible holes and deep scratches.

I started by cleaning out the holes and filling them with a 2 part filler to match the tiles' colours.

I used diamond honing pads to repair the scratches and feather the repair across the tiles. The feathering minimised the visible depression in the surface of the tiles caused by the repair.

I polished the floor with marble polishing powder to create a deep lustrous shine.

To finish the restoration, I sealed the Travertine with a high-quality impreg…Read More

This victorian tiles cleaning nottingham project is about a restoring a soiled tile floor.
The floor was over 100 years old, so you can imagine it has suffered quite a bit of wear.
The result was a dull-looking, soiled floor that looked nothing like the original floor. 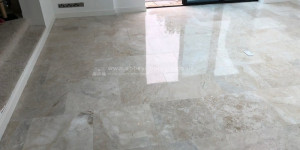 The floors were ground using metal sintered diamonds. The grinding process removed the old surface and the lippage. After the marble grinding, the floors had a flat, even surface.

The floors were diamond-honed to remove the scratches created by the grinding process and prepare the floors for diamond polishing.

The marble was finally treated with a high quality impregnating Sealer. The impregnating sealer sits inside the surface of the marble, leaving the deep gloss finish.

The client was absolutely thrilled with the marble restoration work. 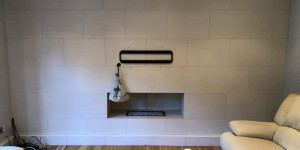 I cleaned one Limestone tile at a time, cleaning the tile and immediately rinsing with clean water.

As I cleaned, I could feel that some tiles had residual grout haze. So I used non-acidic grout haze removers to remove the surface grout without damaging the wall.