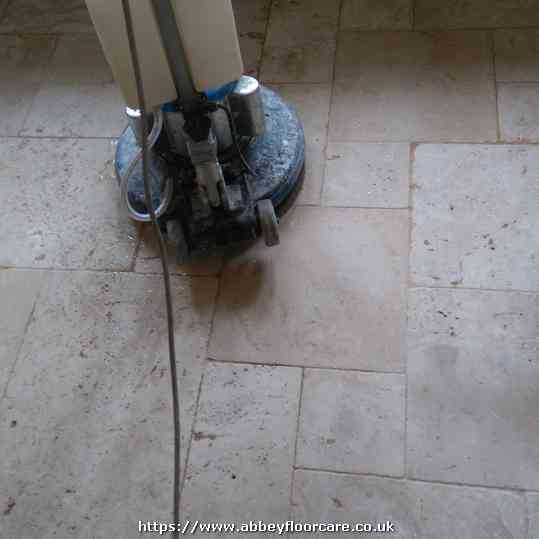 Inform Us About The Floor

You Will Get A Prompt Reply

Why You Will Want To Choose Abbey Floor Care

Contact Us Now! It is straight forward to get a quote for your stone floor cleaning Gloucestershire. 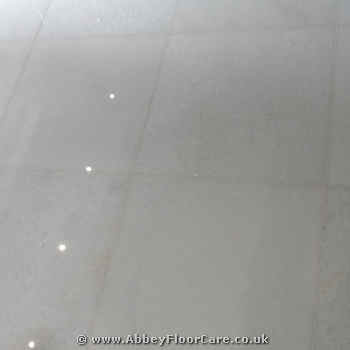 Bit by bit marble tiles will lose its initial finish. Scratches and spill damage build and remove the initial surface. Marble Polishing is the best way to revive the finish.

We use diamonds to eliminate the damage and marks and recover the original shine.

If the tiles are not even, even this disorder is called "lippage". The only way to make a marble tile floor perfectly smooth is by grinding off the lippage and irregular edges of the tiles. You require dedicated machines and several years of experience to grind a marble tile floor, nevertheless the final result is dazzling.

Following grinding, the marble and grout are at the same level. The marble floor will get the look of being a single piece of marble.

Maintaining a ground and polished marble floor is a lot like cleaning an individual piece of glass. Also, soil doesn't get stuck into the grout lines. Cracks, chips and hole repairs in many cases are an element of the marble restoration service. We can advise the appropriate restoration service.

Find out more about our Marble Polishing Gloucester service and our wide-ranging professional cleaning  options or Book a Quote. 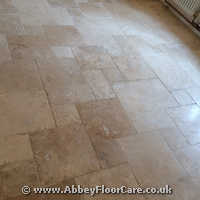 The vast majority of the Travertine in the United Kingdom has a honeycomb structure with a large amount of holes. There will various forms of Travertine floor tiles, including tumbled, honed and polished. As time passes, the original hole filler falls out, and the holes get filled with unattractive soil.

Working to the highest standard, Travertine floor restoration Companies have use a mix of machine scrubbing, hand scrubbing and pressurised rinsing to eliminate old sealers and embedded soil. 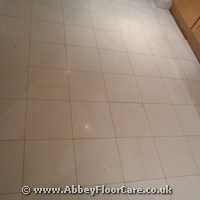 Limestone ultimately looses its original surface. This surface damage is caused by foot traffic scores and surface etching Limestone Polishing is your only way to reinstate the original appearance. We use diamond polishing machinery to bring back the gloss.

In the event that tiles are not really, even this problem is known as "lippage". The only way to make a Limestone floor smooth is by grinding away the lippage and irregular edges of the tiles. You should have dedicated machinery and several years of grinding and polishing to grind, hone and polish a Limestone floor, however the final result is beautiful. The Limestone will have the appearance of appearing as a single area of Limestone.

After grinding, the Limestone and the grout are at exactly the same level. It is incredibly easier to clean a smooth, sleek Limestone than an irregular floor. A smooth surface floor doesn't have grout depessions to trap soil. Cracks and chips can be repaired with coloured resin fillers. The restoration needed should be decided by the current condition of the floor. 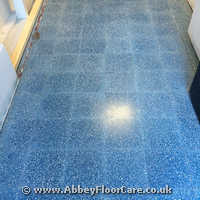 Terrazzo has been used for many thousands of years as a decorative flooring Gradually, Terrazzo will lose the original finish. Minute scratches and etch marks build up and damage the initial appearance.

Ultimately, the Terrazzo will need to be polished to the highest standard. We use specialist Terrazzo polishing equipment and diamond tools to grind and polish the Terrazzo. Once the Terrazzo is cleaned and polished, we are able apply a sealer which protects against every day spillages. 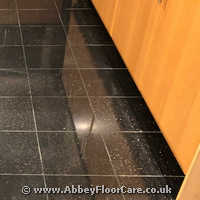 Granite is a really popular flooring. Granite is an extremely hard flooring and resistant to surface damage from scratches and staining compared to other stone such as limestone and marble. Granite flooring requires less frequent professional maintaining in comparison to other stone.

Granite is so hard, that lots of companies do not have the equipment or experience to restore the stone. We can restore all forms of granite flooring. to the highest standard. 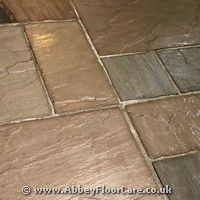 Sandstone is made of highly compressed sand, including various minerals including quartz and feldspar. Whilst sandstone is sturdy it is porous, so dirt gets trapped in the surface and it is tough to remove.

There is dedicated scrubbing and rinsing machinery to eliminate the soil and old sealers, refurbishing the initial sandstone finish We then apply a long-lasting sealer that makes your sandstone floor much easier to clean. Once we inspect your floor, we are able to advise you regarding the best restoration process. 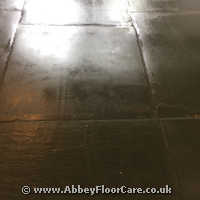 We use professional sealer removers and rotary scrubbing appliances to remove the layers of old sealer. After the professional cleaning is completed,finally, we use a durable sealer that will make a floor more straightforward to mop.

If you prefer a smooth finish, we are able to grind the slate, but we must gauge the slate before grinding. 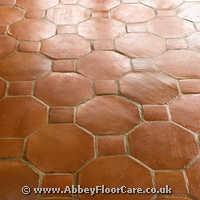 Terracotta is among the most permeable floors which we run into but has been utilized for floor tiles for thousands of years.

Regardless of its vulnerabilities, Terracotta may be restored back again to a wonderful look.

We can seal the Terracotta with a genuine beeswax finish or a tough synthetic sealer. 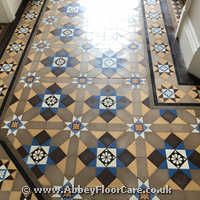 The tiles have a matt finish and acquire their colour through the clay found in their manufacture.

Many of these floors were sealed and then covered with carpet or lino.

With their age, these floors may have a range of covering residues, that really need specialist cleaning

A colour intensifying sealer is applied following cleaning, to bring back the first colours in the tiles. Topical sealers and waxes will give the floor a sheen or glossy finish. 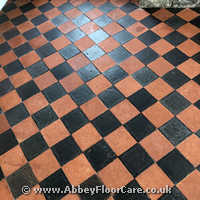 Quarry tile floors were once a major feature in terraces and farmhouses in the country, but many of those floors have fallen into different states of disrepair.

Many years of soil and old sealers can lead some individuals to consider their floor is past repair, but that is often not the case.

We can eliminate the layers of old coatings and dirt, leaving an attractive new finish. If Quarry tiles are laid on sand, ash or lime, use sealers that enable the free transfer of moisture. 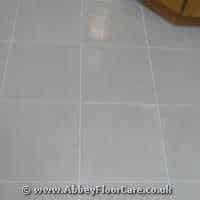 Porcelain is actually a ceramic mix with sand and feldspar added to produce a denser tile.

This makes Porcelain much more resistant to stains and simpler to maintain than standard ceramic tiles.

There are some inferior porcelains that may absorb surface soil and spills similar to natural stone floors. If you have got an inferior Porcelain, the surface soil may be difficult to remove.

We have the experience and equipment to eliminate this difficult to reach soil.

After cleaning, we use specialist Porcelain sealers to prevent this problem.

Solid color Porcelain may be ground and restored like Granite or Marble.

Find out more about our Porcelain Tiles Cleaning Innsworth floor restoration service and also our comprehensive professional cleaning solutions or Book a Quote. 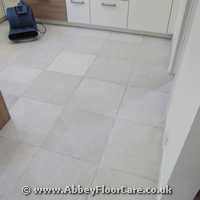 The glassy finish is simpler to clean and restore.

None the less, professional cleaning, specialized cleaning solutions and equipment can give the very best results.

We always put on a professional sealer after cleaning. Tile sealing will make mopping much easier and helps to protect from spillages.

Find out about our Ceramic Tile And Grout Cleaning Innsworth cleaning method and our comprehensive professional stone floor cleaning treatments or Book a Quote utilizing a company that works to the highest standard in stone restoration.

There tend to be aspects of natural stone restoration when undertaking natural stone cleaning. Restoring stone and tile usually involves many stages. At least, all stone floors endure some type of generic deterioration. In many cases, soil, spills and traffic marks ruin floor's finish, hence the need for stone restoration. A polished stone floor wears faster because traffic wear that will begin to damage he polish and weaken the sparkle. Porous tile and stone that is sealed with a film-forming surface sealer will progressively sustain wear deterioration.

Grout is frequently the most vulnerable element of a floor installation. Grout is softer than natural stone stone and tile and more vulnerable to abrasion and chemical based damage. Many natural stone floors also commonly need to have crack, chip or hole repair.

Resurfacing takes away damage from etch spills and surface scratching.Natural stone has the appeal that a soiled, porous surface can be taken away, uncovering a beautiful new surface.

Steadily a stone floor will loose its original gloss. The loss in luster is due to foot traffic scratching and surface damage. Polishing is the the only way to bring back the original polish.

On marble, Granite, Terrazzo, Polished Limestone and Polished Travertine floors, the highest standard diamonds are used to remove the surface wear and rejuvenate the original polish. Gloss sealers produce the shine on Honed Travertine, Clay, Honed Limestone, Slate & Sandstone tiles. Sealer removing substances are applied to remove all traces of the old sealer, and then a brand new gloss sealer is applied.

Stone Floor Cleaning Gloucestershire
And Throughout The Country

Welsh: Swydd Gaerloyw is a county in South West England .

The county comprises part of the Cotswold Hills, part of the flat fertile valley of the River Severn, and the entire Forest of Dean .

The county town is the city of Gloucester, and other principal towns include Cheltenham, Stroud, Tewkesbury, Cirencester, Dursley, Cinderford, and Lydney .

The current Gloucestershire County Council area does not have the same geographical boundaries as the historic county .

Some northern parts of the county, including Long Marston and Welford-on-Avon, were transferred to Warwickshire in 1931 .

Following the Local Government Act 1972, some southern parts of the county were transferred to the new county of Avon, which ceased to exist on 1 April 1996 .

After 1996, the city of Bristol and South Gloucestershire became separate unitary authorities .

Travertine Polishing – What Do You Need To Know? 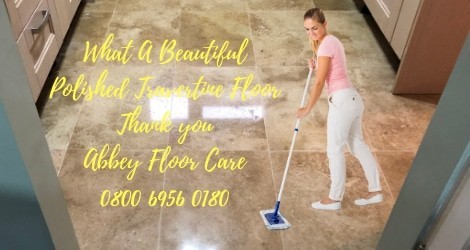 My customer in Gloucester has a lovely polished Travertine floor. After 10 years, and a previous polish, in places, the shine was starting to wear. The tiles also had a few visible holes and deep scratches. After completing the Travertine restoration work, my client was delighted. 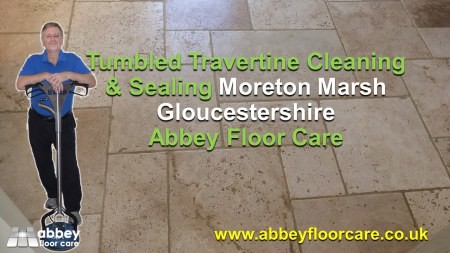 This Limestone Floor Cleaning Matlock project is about restoring a soiled Limestone tile floor that was difficult for my client to clean.

The limestone floor was only 2 years old, but it had gradually become dirty and cleaning wasn't working.

My client had tried mopping and steam cleaning, but neither had kept the floor looking clean and inviting.

This area of large Slate floors in Abergavenny, over 1500 square feet, had a wax finish. However, with two dogs, the homeowner found it increasingly onerous to strip and re-wax every year.

Sandstone tiles are installed in a small kitchen and part hallway in Codicote, which is extremely soiled.

I was asked to clean the sandstone tiled floor as is the homeowner felt the floor was not hygienic and so she wanted a clean floor .

Soil is not unusual on sandstone, as the surface is very abrasive and traps soils very easily. 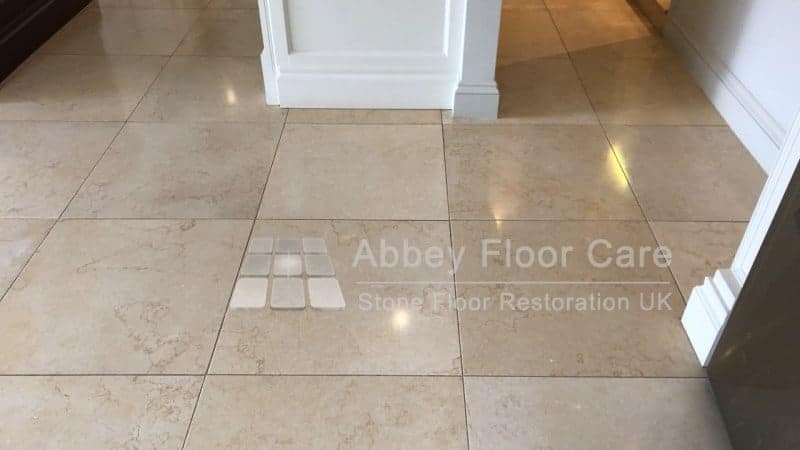 Originally, this Limestone floor was stunning but was now overdue for some love and care to restore it back to its’ former glory.

Working in sections, I applied Limestone Wax And Sealer Remover and left it for 30 minutes to soften the old waxes and sealers.

I used a rotary scrubbing machine to agitate the softened surface finish and vacuumed away the old residues.

Then I deep cleaned the floor and grout with a rotary scrubbing machine. I also used my pressurised Rinse and Capture equipment, to help remove ingrained soils in the grout and surface pits.

There was a large, ugly crack in the doorway to the sitting room. I opened the crack with a diamond cutting …Read More