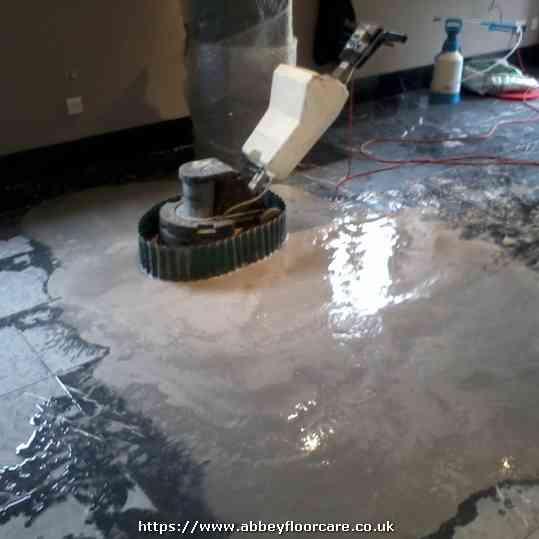 Inform Us About Your Floor

You Will Receive A Quick Reply 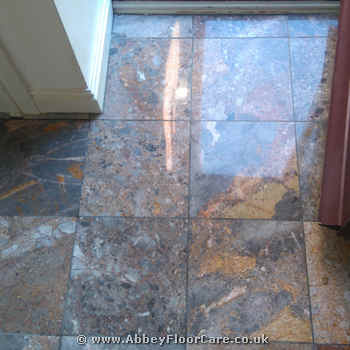 In the long run, Marble will end up matt and loose its appearance. This damage to the surface is caused by foot traffic scores and etch marks Marble Polishing is the best way to bring back the original polish.

We use diamond polishing machines to restore the gloss.

It is very practically impossible to lay a marble tile floor completely flat. The only way to make a marble floor perfectly flat is by grinding off the lippage and jagged tile edges. Marble floor grinding is a professional job, that brings superb results.

After grinding, the marble tiles will sit at the same level the grout lines. The marble floor looks "monolithic", appearing to be manufactured from a single slab of stone.

After grinding and polishing mopping is a piece of cake, because the mop slides over the floor. Also, soil does not get stuck into the grout lines. If your marble has chips and cracks, we are able to repair the damage using resin fillers, closely colour matched to the marble. After we have assessed the marble floor, we will advise the very best marble restoration service.

Find out about our Marble Polishing Northampton work including our wide-ranging professional cleaning  systems or Book a Quote. 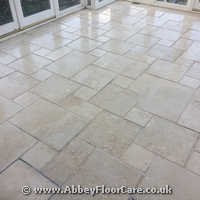 A Travertine floor is a type of Limestone. Travertine floor tilescan be supplied in several finishes, including honed, polished and tumbled. As the stone wears, the hole filler falls out, and the holes fill with dreadful dirt and soil.

Working to the highest standard, restoration service providers use specialist machinery and cleaners to get rid of soil and old sealers on a Travertine floor. 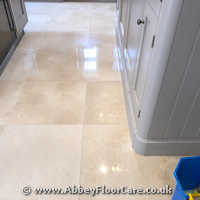 Steadily Limestone will loose its initial polish. The dullness is brought on by small scratching on the surface of the Limestone where it was walked on. Gradually, the tiles will need to be repolished. We use industrial diamond polishing machinery to bring back the initial surface.

Nearly all Limestone surfaces are not even as the Limestone tiles are not put down flat. We can grind off the uneven edges of the tiles, making the tile surface perfectly flat. It is an involved process however the results are breathtaking. The Limestone will have a monolithic appearance as just one area of stone.

Following grinding, the Limestone tiles will sit at the same level the grout lines. A smooth Limestone finish is much easier to maintain. There will be no uneven grout lines to trap soil. Limestone restoration commonly features some crack and chip repairs, using Limestone fillers. Once we assess your Limestone floor, we will advice he best restoration service. 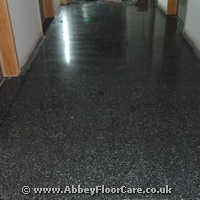 The best way to restore the initial finish is by polishing the Terrazzo to the highest standard. We use industrial-grade Terrazzo polishing equipment and diamond tools to grind and polish the Terrazzo. We can help stop this soil with Terrazzo sealers. 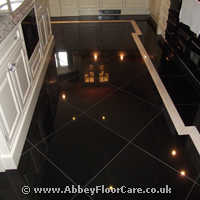 Granite is a well known stone for domestic and commercial rooms. Granite is a really hard tile flooring, perfect for heavy-duty traffic areas. Granite flooring resists wear longer when compared with other stone flooring, like marble or limestone.

As a result of its hardness, granite really needs specialized restoration. We provide the full range of Granite cleaning and restoration services. to the highest standard. 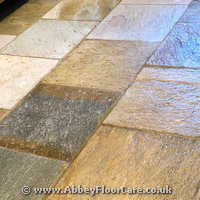 Sandstone floor tiles appear in several different shades of brown, red, yellow and cream. Whilst sandstone is durable it's also porous, so dirt gets trapped within the surface and it is difficult to remove.

We use a mix of machine scrubbing, hand scrubbing and pressurised rinsing to eliminate all traces of old soiled sealers and clean the floor to the highest standard. Then we apply a long-lasting sealer that makes your sandstone much easier to clean. After inspecting the tiles, we are going to advise the most appropriate Sandstone restoration service. 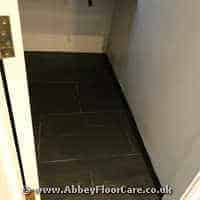 We use professional sealer removal treatments and rotary scrubbing appliances to get rid of the layers of old sealer. Once our professional cleaning is completed , the floor is left to dry, then use a lasting, easy to clean sealer.

If you want a smooth finish, we are able to grind the slate, but we have to gauge the slate before grinding. 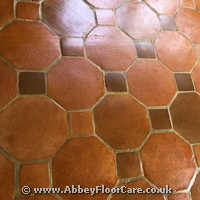 Terracotta doesn't have glaze on the surface, therefore it will absorb spills and soil very quickly.

Cleaning and restoring terracotta tiles starts with getting rid of the old polish, sealers and ingrained soil with specialist sealer removers and cleaning chemicals.

Whilst we are able to seal Terracotta with Linseed oil and wax, we recommend a tough synthetic sealer that will work for years, with minimum maintenance. 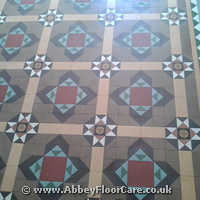 Victorian tiles are manufactured from natural clay with a natural non-shiny finish.

Because of their age, these floors have had plenty of wear and can have layers of various sealers.

Cleaning these floors can be challenging due to all of the old sealers and residues.

A colour intensifying sealer is applied following cleaning, to restore the initial colours when you look at the tiles. Topical sealers and waxes will provide the floor a sheen or glossy finish. 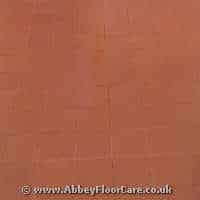 Quarry tile floors were once a proud feature in terraces and farmhouses in the country, but the majority of of those floors have since fallen into assorted states of disrepair.

One common problem is past coatings of sealer which must be removed.

Professional cleaning can remove the years of grime and older sealers, exposing a beautiful floor. If the tiles are laid on sand, ash or lime, put on sealers that permit the free movement of moisture. 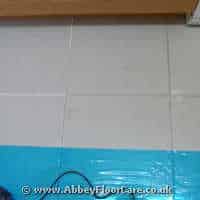 Porcelain is classed as a ceramic, but manufactured with alternative ingredients than standard glazes and clay tiles.

This helps make Porcelain a lot more resistant to stains and simpler to keep up than traditional ceramic tiles.

Inferior porcelain has microscopic holes which will absorb soil similar to natural stone floors. It could be hard to remove this soil.

We can get rid of ingrained dirt with equipment designed to go into the microscopic pits where the soil is held.

We will help stop the dirt with Porcelain sealers.

If you have got a trough-colour Porcelain, we could re-surface the tiles by Grinding and re-polishing. 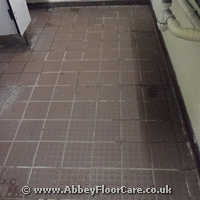 This happens because the tile surface is usually glazed.

Once your floor is cleaned we'll apply a sealer. Sealing helps make mopping much easier and helps to protect against spillages.

Discover more about our Ceramic Tile And Grout Cleaning Thrapston cleaning method as well as our extensive professional stone floor cleaning systems or Book a Quote with the help of a company that operates at the highest standard in stone restoration.

Natural tone cleaning is rarely just cleaning, there is certainly often extra restoration needed. Each kind of natural stone features its own characteristics and restoration difficulties. All natural stone floors suffer with wear and surface damage. Traffic harm, spots and surface problems will happen on many stone floors, wrecking the appearance, making the stone appear worn and unappealing, consequently the need for stone restoration. A polished marble or granite floor shows wear a lot faster since traffic abrasion that will quickly scratch he polish and dull the gloss. Wear problems gradually affects porous stones such as Sandstone, Travertine, Limestone and Terracotta, which are most often protected with a surface sealer.

Grout is frequently probably the most sensitive section of a stone or tile installation. Being a little bit concave, hence the grout captures more grime compared to the tile itself. Holes may be filled and cracks repaired included in the restoration.

Resurfacing takes away damage from etching and surface scratches. Natural stone can be ground to show a new surface.

Over time your stone can look lackluster and loose its appeal and shine. The loss of sparkle is due to microscopic scratches on the stone where it has been stepped on. The only way to bring back the first finish is by polishing the stone.

Stone Floor Cleaning Northamptonshire
And Throughout The Country

, archaically known as the County of Northampton, is a county in the East Midlands of England .

The county is administered by Northamptonshire County Council and by seven non-metropolitan district councils .

It is known as The Rose of the Shires .

Northamptonshire is the southernmost county in the East Midlands region .

Apart from the county town of Northampton, other major population centres include Kettering, Corby, Wellingborough, Rushden and Daventry .

Northamptonshires county flower is the cowslip .

The Soke of Peterborough falls within the historic boundaries of the county, but its area has been part of the ceremonial county of Cambridgeshire since 1974 . 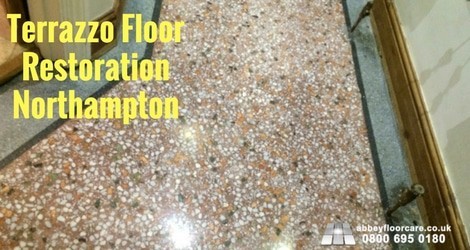 This Terrazzo hallway floor in Northampton was discovered under a wooden floor. The client removed the wooden floor and I then removed the glue. I ground and honed the floor. I repaired a couple of cracks in the floor before polishing Terrazzo to a high shine. I applied a high quality impregnating sealer.

Terrazzo Can Be Beautiful, Colourful And Shiny – It Does Not have to Be Dull, Cracked And Grimy 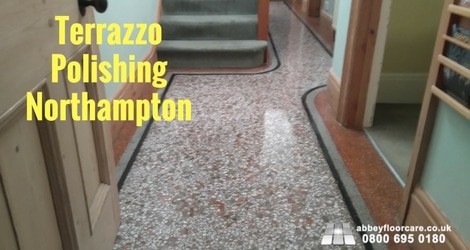 Old Terrazzo floor in Northampton. Had cracks and old soiled finish. I repaired the cracks, ground, honed and polished the Terrazzo to a lovely finish. My client was very pleased with the results and recommended me to his neighbours.

Another Beautiful Polished Terrazzo Floor Project In Northampton – By Recommendation 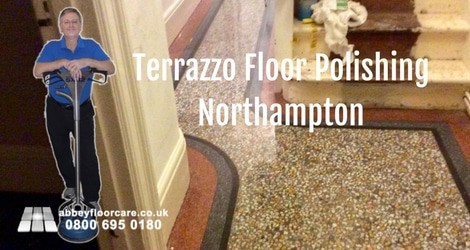 This Terrazzo floor in Northampton had been polished to a poor finish. I removed the old uneven finish by grinding the floor, then honed the Terrazzo, repaired cracks and polished the floor. I applied an impregnating sealer to help protect the floor.