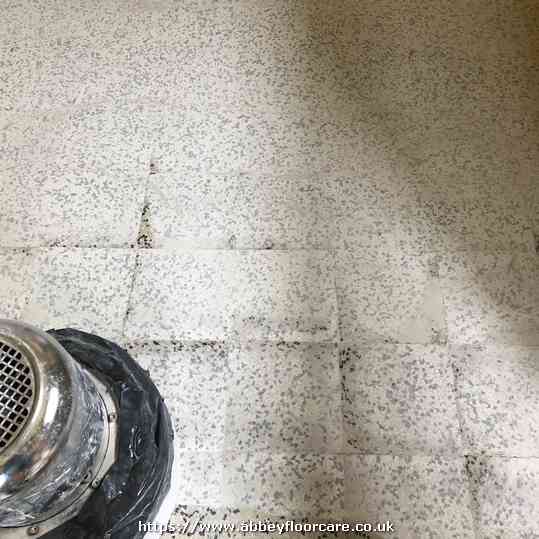 How We Work With Each Other

Provide The Size And Type Of Stone

You Can Expect To Receive A Punctual Reply

We Agree A Start Date

Contact Us Now! It's easy to arrange a quote for your stone floor cleaning Nottinghamshire. 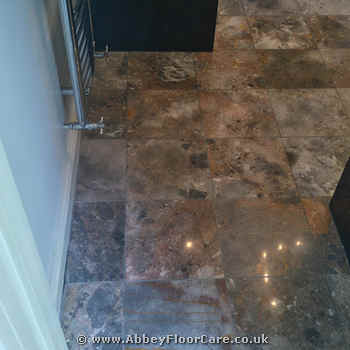 An original appearance on marble will steadily loose its gloss. This damage to the surface is brought on by foot traffic scratches and surface etching The only way to restore the initial shine is through polishing the marble.

We use industrial diamonds to remove the marks and scratches and restore the original gloss.

If your floor happens to be installed leaving jagged tiles, that is known as lippage. A marble floor should be smoothed by grinding off the lippage and uneven tile edges. Marble tile grinding is a specialist job, providing stunning results.

After grinding, the tiles will be the same level the grout. The floor will appear like a single area of marble.

Maintaining a ground, honed and polished marble floor is a lot like cleaning an individual bit of glass. A smooth surface floor does not have grout lines to capture dirt. Chips, cracks and hole repairs tend to be part of the restoration procedure. We can recommend the right marble restoration process.

Get more information about our Marble Polishing Nottingham service including our comprehensive professional cleaning  treatments or Book a Quote. 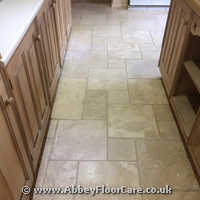 A Travertine floor is characterised by a honeycomb structure, with plenty of holes. Travertine floor tiles qre available in a range of finishes, polished, smooth honed and tumbled. Over time, the initial hole filler falls out, thereafter the holes fill with ugly soil.

Working to the highest standard, restoration service providers use specialist equipment and chemicals to remove soil and old sealer residues on a Travertine floor.

After cleaning, the Travertine floor can be re-grouted to fill any open holes. Following restoration and grout filling we apply durable sealers. 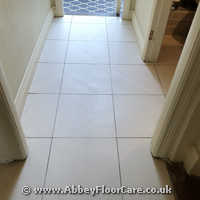 In the event that tiles are not even, perfectly even this problem is referred to as "lippage". We can grind away the irregular edges of the tiles, making the floor surface level. You should have specialized machinery and years of hands on experience to grind a Limestone tile floor, nevertheless the result is spectacular. The Limestone floor will get the appearance of becoming just one slab of Limestone.

After grinding, the tiles will be at the same level the grout. After grinding maintenance is a piece of cake, because the mop slides on the floor. A smooth floor does not have grout depessions to hold dirt. If your Limestone floor has chips and cracks, we can repair them with resin fillers, closely colour matched with the Limestone. Once we have assessed your floor, we will suggest he ideal restoration processes. 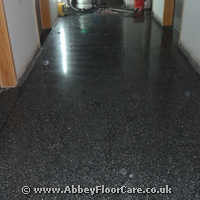 Terrazzo is an attractive and hard-wearing flooring, thus its use as a flooring in supermarkets, airports, commercial and industrial buildings. Gradually, Terrazzo will lose the original finish. The dullness is caused by microscopic scratches on the surface where it's been walked on. 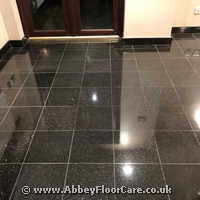 Granite is widely used in commercial and domestic rooms. Granite is a rather hard stone flooring and is very resistant to damage from scratches and staining compared to other stone such as marble and limestone. Granite flooring is harder wearing than other stone, like marble or limestone.

Because of the stone's hardness, granite must have specialized cleaning and restoration. We have the experience and equipment to revive granite floors. to the highest standard. 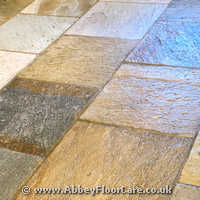 Sandstone is manufactured out of highly compressed sand, including different minerals such as quartz and feldspar. Old sandstone may be covered with a number of old coarings and trapped dirt, so if at all possible, it will need professional cleaning and sealing.

We use a rotary brushing machines, sealer removers and pressure rinsing to clean the sandstone Then we use specialist sealers that will last for many years not just months. The specific restoration needed should be decided by the healthiness of your floor. 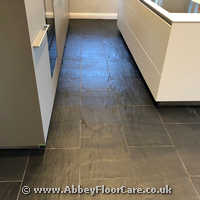 Slate is an incredibly adaptable material that can be finished with a range of finishes including rough texture, smooth honed or polished polish. Cleft slate can get an accumulation of soil inside the crevices this is certainly difficult to remove.

We use a mixture of machine scrubbing and hand scrubbing to get rid of all traces of older dirty sealers and clean the floor. When our professional cleaning is finished , the floor is left to dry, then apply a long-lasting, easy to maintain sealer. 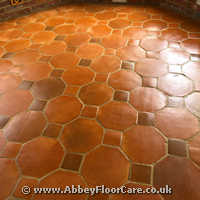 We use a long lasting sealer for terracotta, so that you get the most value from your cleaning. 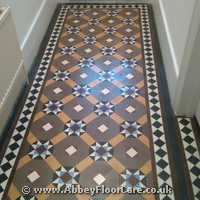 Victorian tiles are made of natural clay and have a natural matt finish.

Along with the changes in home design, many of these floors get underlay from carpet, lino adhesive, bitumen and additional glue deposits.

After cleaning, a colour intensifying sealer is used to regenerate the oroginal colours in the tiles. If you want a sheen or gloss finish a topical sealer or wax could be used. 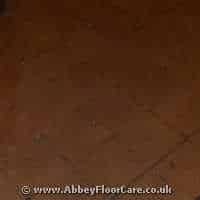 Quarry tile floors were at one time a major feature in terraces and farmhouses in the country, however, many of those floors have since fallen into assorted states of repair.

Whilst the tiles can happen dirt, these floors are very durable and can look just like new after a proper clean.

Whilst the tiles may appear soiled and discoloured, they are amazingly durable and could look as good as new after an effective clean. Quarry tiles in many cases are laid with no damp proof membrane layer, therefore we want to apply the best sealer to allow the tiles to breathe. 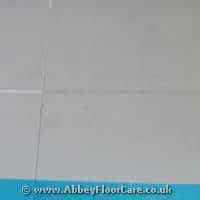 Porcelain has started to become an progressively fashionable alternative to traditional ceramic tiles and natural stone.

Porcelain is very moisture-resistant, therefore spillages cannot soak into the tile and lead to stains.

Some inferior porcelains have surface pores which will absorb soil just like natural stone floors. The microscopic surface pits make it hard to remove this soil.

You need specialist machinery and cleaners to get rid of this soil.

After your porcelain floor is clean we are able to use a sealer to protect against regular soil and spills.

Solid colour Porcelain Tiles may also be ground and polished, similar to Granite or Marble.

Get more information about our Porcelain Tiles Cleaning Hucknall floor restoration services along with our substantial professional cleaning systems or Book a Quote. 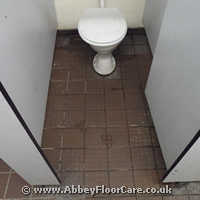 A glazed finish is a lot easier to clean.

A specialist sealer will be put on after the the cleaning process. A sealed ceramic tile is a lot easier to mop and a sealer helps stop stains.

Get more information about our Ceramic Tile And Grout Cleaning Hucknall cleaning method along with our extensive professional stone floor cleaning services or Book a Quote utilizing a company that operates to the highest standard in natural stone.

Natural tone cleaning is hardly ever cleaning alone, there is frequently more restoration required. natural stone floor restoration is usually an involved process. At the least, all stone and tile bear some kind of generic wear and tear. The most typical challenge we encounter during stone restoration is oily soil trodden in to the floor forming a lifeless, unsightly coating. Polished marble tiles and granite floors show deterioration very easily, as little traffic scratching on the surface alter the gloss and trap soil. Porous tile and stone sealed with a coating sealer will progressively suffer from wear damage.

The vast majority of tile flooring have grout lines. Cement grout is softer compared to stone and more at risk of abrasion and chemical based damage. Many stone floors also generally need to have crack, chip or hole repair.

We use resurfacing to remove surface damage due to acid etching and scratches.We're able to get rid of the old surface from the stone, revealing a brand new clean surface.

Over time a stone floor will loose the original polish. The loss of luster is caused by tiny scratches on the stone where it has been walked on. Polishing is the the only way to regenerate the original luster.

We use the highest standard diamond polishing equipment to reinstate the initial shine on Granite, Terrazzo, Polished Limestone and Polished Travertine natural stone floors. The gloss on Honed Travertine, Honed Limestone, Sandstone, Slate & Clay tiles is done using a high gloss sealer. The old, dull sealer is removed and a fresh gloss sealer is used to create the high polish.

Stone Floor Cleaning Nottinghamshire
And Throughout The Country

is a county in the East Midlands region of England, bordering South Yorkshire to the north-west, Lincolnshire to the east, Leicestershire to the south, and Derbyshire to the west .

The traditional county town is Nottingham, though the county council is based at County Hall in West Bridgford in the borough of Rushcliffe, at a site facing Nottingham over the River Trent .

The districts of Nottinghamshire are Ashfield, Bassetlaw, Broxtowe, Gedling, Mansfield, Newark and Sherwood, and Rushcliffe .

Over half of the population of the county live in the Greater Nottingham conurbation which continues into Derbyshire .

The conurbation has a population of about 650,000, though less than half live within the city boundaries . 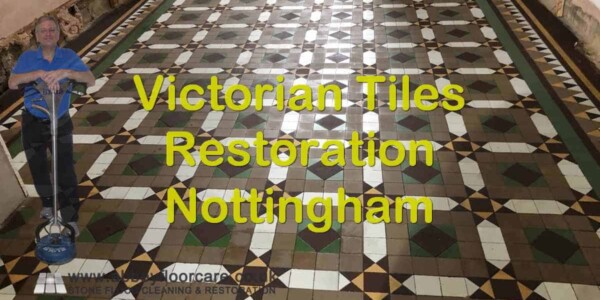 This victorian tiles cleaning nottingham project is about a restoring a soiled tile floor. The floor was over 100 years old, so you can imagine it has suffered quite a bit of wear. The result was a dull-looking, soiled floor that looked nothing like the original floor. 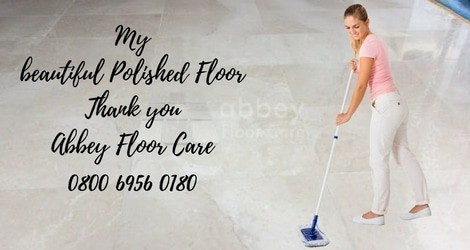 Marble floor in Sandiacre Nottingham with a dull, scratched finish with severe lippage. I ground the floor smooth. Then honed and polished the floor to a high shine. Finally, applied a high quality impregnating sealer. My client was really happy with the finish and the fact that the floor is now so much easier to clean.

How To Get Dirty Tumbled Travertine Clean Again 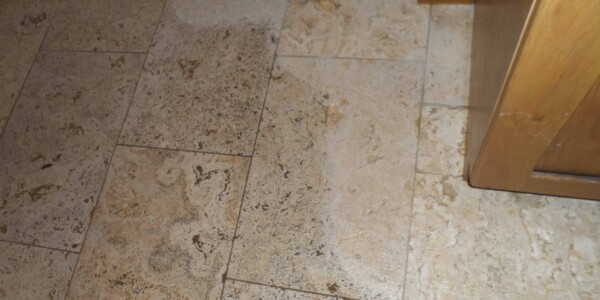 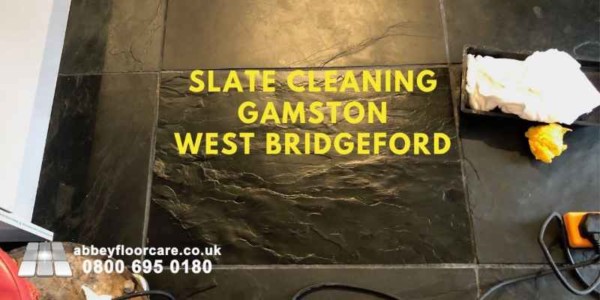 This is a small kitchen slate floor in Gamston, West Bridgeford. The floor har various marks and grout residue that looked like marks. I cleaned the floor and removed the grout residue. I applied a low-sheen film-forming sealer. The sealer enhanced the colour of the tiles and gives a long-lasting, easy-to-clean finish. My client was really happy.