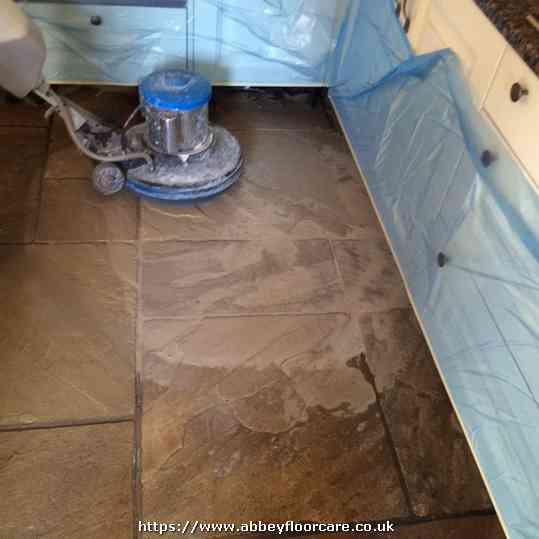 You Can Expect To Receive A Prompt Reply

Reasons Why You May Want To Choose Us 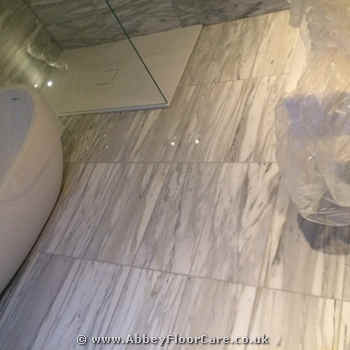 Gradually a marble floor will lose the initial shine. Surface scratches and stains add up and damage the initial polish. The best way to reinstate the appearance is through polishing the marble.

We use industrial diamond polishing to grind and polish a marble floor and rejuvenate the original surface.

If your floor happens to be put down with jagged tiles, this can be described as lippage. We can grind off the irregular tile edges, making the floor surface smooth. It is a complicated process however the results are dazzling.

After grinding, the marble will be flush with the grout lines. The floor will look like a single slab of stone.

Cleaning a ground and polished marble floor is similar to cleaning a single bit of glass. Also, soil doesn't get stuck in the grout lines. Holes, chips and crack repairs are often part of the marble restoration work. The type of restoration needed is going to be based on the current condition of the marble floor.

Find out about our Marble Polishing Stoke-on-Trent services along with our substantial professional cleaning  options or Book a Quote. 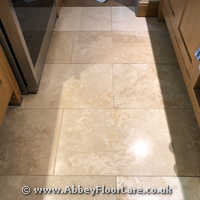 A Travertine floor has a permeable structure, with plenty of holes. There will various types of Travertine floor tiles, including polished, honed and tumbled. As the travertine wears, the hole filler comes away, and the holes fill up with unappealing dirt and soil.

Working to the highest standard, restoration firms use rotary scrubbing equipment and pressure rinsing to clean the Travertine floor. 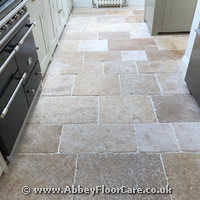 The initial shine on Limestone will steadily loose its gloss. The dull appearance is due to microscopic scratches on the surface where it was walked over. Limestone Polishing is the best way to restore the appearance. We operate professional equipment and industrial diamond tooling to grind, hone and polish the stone. 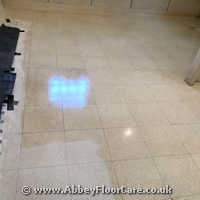 Terrazzo is a stylish yet hard wearing flooring, hence its use as flooring in supermarkets, airports, commercial and industrial buildings. Terrazzo ultimately loses the original finish. Minute scratches and etching builds up and damage the initial surface. 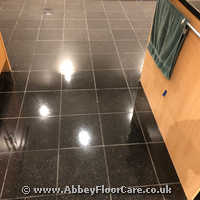 Granite is so hard, that lots of companies don't have the equipment or knowledge to revive it. We have the experience and equipment to revive granite floors. to the highest standard.

Sandstone is formulated mostly of quartz, iron oxide, silica and calcium based deposits so it is a very durable stone. The voids between the sandstone particles trap soil that can be difficult to remove.

We use a variety of machine scrubbing, hand scrubbing and pressurised rinsing to remove all traces of old soiled coatings and clean a floor to the highest standard. We then apply a long-lasting sealer that makes your sandstone much easier to clean. After inspecting the floor, we will advise the best Sandstone restoration service. 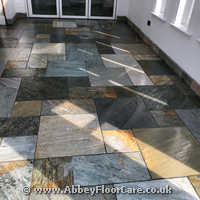 Slate floors look fantastic due to their textured surface and stunning colours. Riven slate can get a build-up of dirt and sealer residues in the crevices this is certainly difficult to get rid of.

We use a mix of machine and hand scrubbing to eliminate all traces of existing soiled sealers and clean the tiles. Once the professional cleaning is complete, use specialist sealers that last for years not months.

If you like a smooth floor, we could grind the floor, subject towards the slate being suited to grinding. 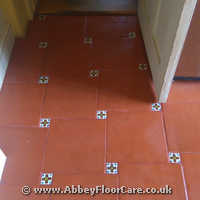 Terracotta provides a unique colour and a rustic appearance in your home, but needs careful maintenance in order to keep it looking its best.

Standard Terracotta sealers need to have regular maintenance and re-application, if they are not cared for, the finish will start to get dirty and porous.

Irrespective of its vulnerabilities, Terracotta may be restored back again to a wonderful appearance.

We use a durable sealer for terracotta, so you get the most value from your cleaning. 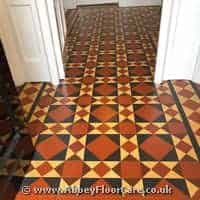 The tiles are unglazed utilizing the the natural colours from the clay used in their manufacture.

With the variations in interior decor, these kinds of floors come with underlay from carpet, lino, bitumen and other glue remains.

Owing to their age, many of these floors may have a range of coating residues, that really need expert cleaning

A colour intensifying sealer is put on after cleaning, to displace the initial colours into the tiles. Topical sealers and waxes will provide a floor a sheen or glossy finish. 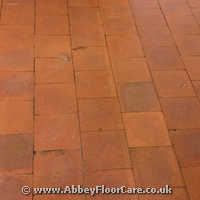 Quarry tile floors were at one time a proud feature in terraced houses and farmhouses across the country, but many of those floors have since fallen into assorted states of disrepair.

One common issue is old coatings of sealer that must be taken off.

Professional cleaning will remove the many years of dirt and older coatings, exposing a beautiful floor. After cleaning, the tiles can be protected with a lasting sealer. 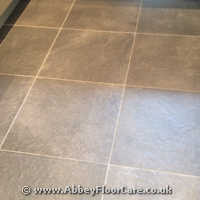 If the blend of ceramics is not right, the top of tiles can be porous. similar to natural stone floors. If you have got an inferior Porcelain, surface soil can be hard to remove.

We can get rid of embedded soil using equipment built to enter into the microscopic pits where the soil is held.

Solid colour Porcelain Tiles could be ground and polished, just like Granite or Marble. 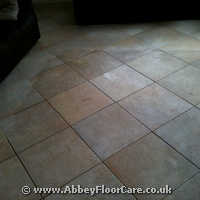 A glassy finish is simpler to clean and restore.

However, specialist stone and tile cleaning does provide a better appearance.

After cleaning and restoration we use a professional sealer. Maintenance is much simpler having a sealed floor, and also a sealer stops spills becoming stains.

Read more about our Ceramic Tile And Grout Cleaning Leek cleaning method including our substantial professional stone floor cleaning solutions or Book a Quote employing a team that works at the highest standard in stone and tile.

There in many cases are aspects of natural stone restoration in natural stone cleaning. Restoring stone and tile often involves numerous procedures. At the very least, all stone floors bear some kind of generic deterioration. In many cases, soil, stains and foot traffic scuff marks ruin the floor finish, subsequently the significance of stone restoration. A polished marble or granite floor wears a lot quicker because traffic wear that will quickly damage he polish and weaken the sparkle. Permeable tile and stone sealed using a surface sealer will progressively become affected by wear deterioration.

Grout is normally the most vulnerable section of a stone or tile installation. Cementatious grout is softer compared to natural stone stone and tile and more at risk of abrasive and chemical based damage. Stone restoration commonly requires some crack and hole repairs.

Etching and scratches can be removed by grinding and honing.Natural stone has got the advantage that a soiled, permeable finish can be taken away, uncovering a lovely new surface.

The original finish on a natural stone floor is going to steadily dull. This dullness is brought on by small scratches on the stone where it has been stepped on. Polishing will be the best way to bring back the initial sparkle.

Stone Floor Cleaning Staffordshire
And Throughout The Country

is a landlocked county in the West Midlands of England .

The largest settlement in Staffordshire is Stoke-on-Trent, which is administered as an independent unitary authority, separately from the rest of the county .

Lichfield is a cathedral city .

Cannock Chase AONB is within the county as well as parts of the National Forest and the Peak District national park .

Wolverhampton, Walsall, West Bromwich and Smethwick are within the historic county boundaries of Staffordshire, but since 1974 have been part of the West Midlands county . 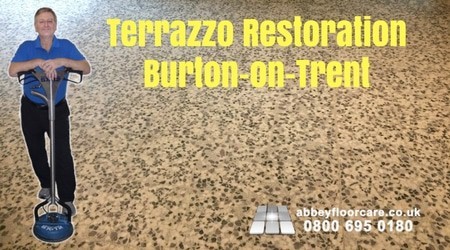 This Terrazzo floor in Burton was around 50 years old. The building started life as an Electrical Store, then a cycling Store and now becoming a Pizza restaurant. I ground the floor to remove the soiled finish. Areas of grout needed replacing with 2 part resin filler. Then I honed the floor to a low-sheen 100 grit finish. Exactly what the store owners were looking for. 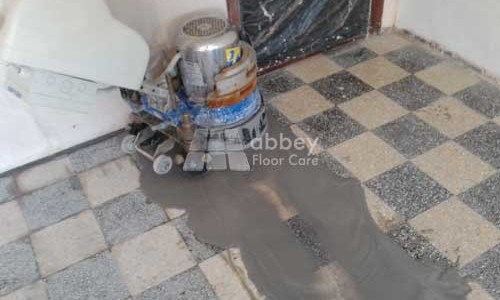 This is a beautiful Terrazzo floor in Cheadle, with seashells rather than marble chips. My client wanted the floor ground to remove the lippage and then polished to a high sheen. After grinding and polishing the floor, I applied a high quality impregnating sealer. 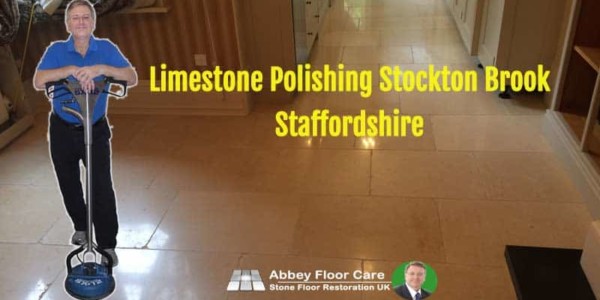 This is a Jerusalem Limestone floor in Stockton Brook, Staffordshire. My client has used a wide bristled brush to clean the grout. Unfortunately, the brush had damaged the soft tile edges. They should have used a specific grout cleaning brush. I used a soft-bristled brush with a rotary scrubbing machine to clean the grout and tiles. I diamond-honed the floor to remove the damage and then polished the tiles to a high sheen finish. Finally, I applied a high quality impregnating sealer.

How To Give White Marble Tiles A Beautiful Shine 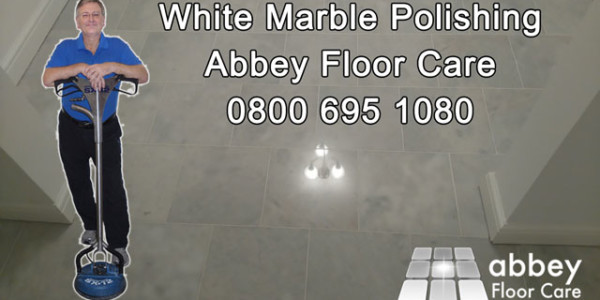 This marble floor in Stoke-on-Trent had lost its shine and had surface scratches. On inspection, there was also a lot of lippage over 2mm high. I started by diamond grinding the marble to remove the lippage and prepare the floor for honing. Diamond honing removed the scratches created by grinding and prepared the floor for marble polishing. I polished the floor to a deep shine and then applied a high quality impregnating sealer. My client was really pleased with the results.