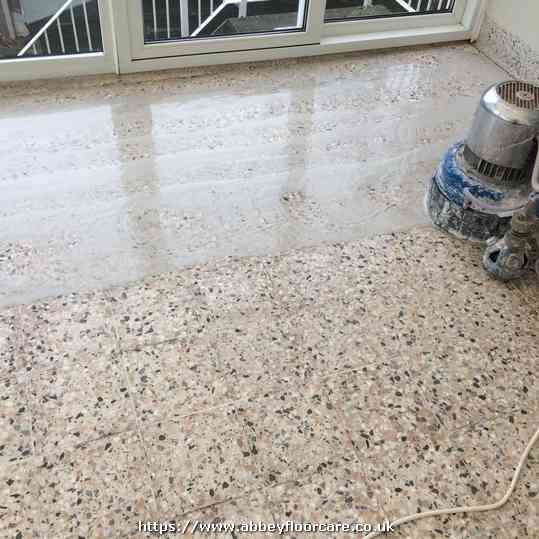 The Way We Work Together

We Will Respond Promptly

Contact Us Now! Book a quote for your stone floor cleaning West Yorkshire 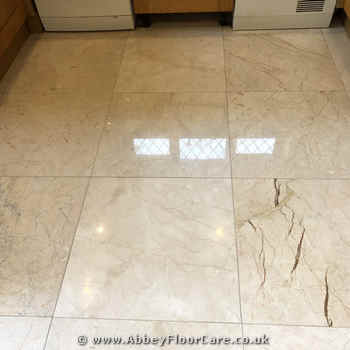 The initial shine on marble will slowly dull. The surface damage is brought on by foot traffic scores and surface etching Sooner or later, your floor will have to be repolished.

We use professional equipment and diamond tooling to grind, hone and polish the marble. to the highest standard

It's virtually unachievable to lay a marble tile floor completely flat. A marble tile floor is leveled by grinding away the lippage and jagged tile edges. This is an involved process but the the finished results are breathtaking.

After grinding, the marble tiles will sit at the same level the grout. The floor will appear like an individual slab of marble.

Mopping a ground and polished marble floor is much like cleaning an individual piece of glass. Also, soil doesn't get stuck into the grout lines. If your marble floor has cracks or chips, we are able to repair the damage with resin fillers, closely colour matched with the marble. The type of restoration needed is going to be decided by the current condition of the marble floor.

Find out about our Marble Polishing Leeds service and also our wide-ranging professional cleaning  services or Book a Quote. 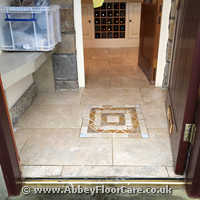 Almost all of the Travertine used in the United Kingdom has a honeycomb structure with a great deal of holes. Travertine floor tiles qre available in a range of finishes, tumbled, smooth honed and polished. The original hole filler often comes out, permitting the holes to fill with dirt and soil.

Working to the highest standard, Travertine floor restoration professionals have specialist sealer removers and rotary scrubbing machines to get rid of the coatings of old sealers and ingrained soil. 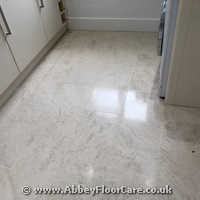 Eventually Limestone will loose its original finish. The surface damage is caused by traffic scratching and etch marks Limestone Polishing is the only way to bring back the finish. We employ professional machines and industrial diamond tooling to hone and polish the stone.

In the event that tiles are not even, even this condition is referred to as "lippage". A Limestone tile floor is leveled by grinding away the lippage and jagged tile edges. Limestone grinding is a specialist process, bringing stunning results. The Limestone floor looks monolithic, appearing to be produced from just one piece of Limestone.

After grinding, the grout sits is level with the Limestone. A smooth Limestone finish is much easier to maintain. There will be no uneven grout lines to hold soil. Limestone restoration generally involves some chip and crack repairs, using Limestone fillers. The particular restoration needed should be dependant on the state of the Limestone floor. 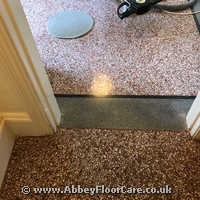 Terrazzo is made by mixing chips made from marble, granite, quartz, or glass chips into a cement or epoxy base . In the long run, Terrazzo will end up dull and lose its finish. Surface damage is caused by traffic scratches and surface damage.

Terrazzo Polishing is definitely the best way to revive finish to the highest standard. Diamonds take away the surface damage and restore the initial Terrazzo shine. After cleaning and polishing, we use specialised Terrazzo sealers. 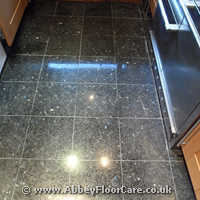 Very few stone floor restoration companies restore Granite, because it is so hard and hard to restore. We offer the full selection of Granite polishing and restoration services. to the highest standard. 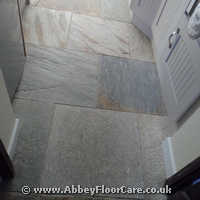 Sandstone is made primarily from quartz, iron oxide, silica and calcium based deposits therefore it is a very long-lasting stone. Whilst sandstone is durable it is porous, so dirt gets trapped within the surface and it is hard to remove.

We use a rotary brushing equipment, sealer removers and pressurised rinsing to completely clean the sandstone We then use specialist sealers that will last for years not months. The particular restoration needed will be decided by the healthiness of your floor. 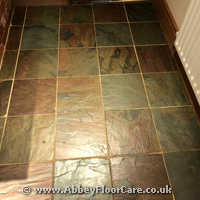 Slate flooring is just one of the most well known forms of natural stone, given that it needs less regular maintenance and cleaning. Slate needs regular sealing to avoid spills and soil marking the surface.

We use professional sealer removal treatments and scrubbing machines to get rid of the layers of old coatings. After the professional cleaning is finished, use industrial-grade sealers that will last for many years not just months.

If you have a suitable slate, it could be ground smooth, which makes it better to clean. 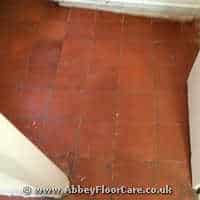 Terracotta does not have any glaze on top, therefore it will soak up spills and soil extremely quickly.

Despite its vulnerabilities, Terracotta may be restored back into an excellent appearance.

We could re-wax the Terracotta or apply a hard-wearing synthetic sealer that is much simpler to maintain. 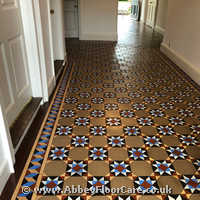 Many Victorian and Edwardian hallways may have floors made of Geometric Encaustic tiles.

Victorian tiles are produced from natural clay and have a normal non-shiny finish.

A good number of these floors were sealed and then covered up with carpet and lino.

The main issues with victorian floor tiles is removing years of oils, polishes, dirt, waxes and grime while not harming the floor.

After cleaning, the original colours of the floor can appear dull, therefore we apply a colour intensifying impregnating sealer to restore the original depth of colour. The mat finish may be polished by making use of a wax or topical sealer. 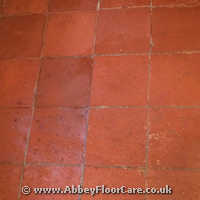 Quarry tile floors were at one time a major feature in terraces and farmhouses in the country, but some of these floors have fallen into assorted states of disrepair.

Whilst the tiles can happen dirt, these floors are remarkably robust and will look as good as new after a proper clean.

Professional cleaning will remove the many years of dirt and older sealers, revealing an attractive floor. Quarry tiles in many cases are laid without a damp proof membrane, therefore we need certainly to apply the right sealer to permit the tiles to breathe. 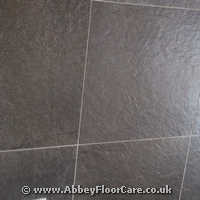 Porcelain is classified as a ceramic, but made with different ingredients than traditional ceramic tiles.

When the blend of ceramic isn't correct, the top of tiles could be porous. just like natural stone floors. The microscopic surface pits make it difficult to remove this soil.

We can remove ingrained soil with equipment designed to go into the microscopic pits where the soil is held.

If you have a solid colour Porcelain, we could re-surface the tiles by Grinding and re-polishing.

Find out about our Porcelain Tiles Cleaning Brighouse floor restoration services as well as our wide-ranging professional cleaning options or Book a Quote. 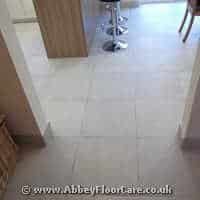 Specialized stone and tile cleaning will still give a better finish.

A specialized tile sealer is put on following the cleaning. A sealed tile is simpler to mop and it helps stop stains.

Find out about our Ceramic Tile And Grout Cleaning Brighouse cleaning method as well as our extensive professional stone floor cleaning service or Book a Quote employing a business that will work at the highest standard in natural stone.

Natural tone floor tile cleaning is seldom cleaning alone, there is certainly commonly more restoration needed. Restoring stone and tile usually involves a number of steps. Natural stone floors suffer from foot traffic wear and damage, because people move over them. In most cases, dirt, spills and foot traffic scratches harm the floor finish, consequently the necessity for stone restoration. A polished marble or granite floor wears a lot faster due to traffic abrasion that will start to damage he finish and dull the shine. A surface sealer does not prevent porous tiles like Sandstone, Limestone and Terracotta gradually suffering from wear and spill damage.

Nearly all natural stone flooring have cement grout lines. Soiled grout is a common problem to be resolved on natural stone and tile floors. Cracks, chips and hole repairs are often an element of the restoration process.

We use resurfacing to remove stone finish damage caused by etching and scratches.You can take away the old finish from the stone, uncovering a new sparkling surface.

Slowly a natural stone floor will loose the original gloss. Scratch damage and etch marks accumulating and getting rid of the initial polish. The only way to replace the original finish is through polishing the stone.

Stone Floor Cleaning West Yorkshire
And Throughout The Country

West Yorkshire is a metropolitan and ceremonial county in England .

It is an inland and, in relative terms, upland county having eastward-draining valleys while taking in the moors of the Pennines .

West Yorkshire came into existence as a metropolitan county in 1974 after the passage of the Local Government Act 1972 and has a population of 2 .

Remnants of strong coal, wool and iron ore industries remain in the county, having attracted people over the centuries, and this can be seen in the buildings and architecture .

However, the metropolitan county, which covers an area of 2,029 square kilometres 783 sq mi, continues to exist in law, and as a geographic frame of reference .

Since 1 April 2014 West Yorkshire has been a combined authority area, with the local authorities pooling together some functions over transport and regeneration as the West Yorkshire Combined Authority .

In March 2020, it was confirmed by the government that West Yorkshire could have its first elected Mayor, provided all five local authorities Bradford, Calderdale, Kirklees, Leeds, and Wakefield approved the deal .

If successful, the first vote would be the 2021 West Yorkshire mayoral election, scheduled to take place on 6 May 2021 .

West Yorkshire includes the West Yorkshire Urban Area, which is the biggest and most built-up urban area within the historic county boundaries of Yorkshire . 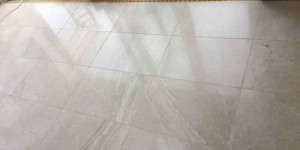 This marble floor had a dull, scratched finish with severe lippage. I ground the floor smooth. Then honed and polished the floor to a high shine. Finally, applied a high quality impregnating sealer. My client was really happy with the finish and the fact that the floor is now so much easier to clean.

Does Your Terracotta Floor Look As Good As This Floor 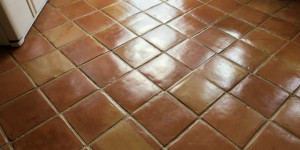 The Terracotta tile floor was around ten years old, and my client wanted to restore the Terracotta as part of a project to re-decorate her kitchen and dining areas.

My client likes a shiny finish on the floors, so she regularly polished the Terracotta with a shop-bought polish. Before polishing, my client would clean the floor with a mop and bucket.

However, Terracotta cleaning with a mop does not remove much soil, and the mop moves a lot of the surface soil into the grout.

I started the Terracotta cleaning by coating sections of the floor with a heavy-duty sealer remover and let the chemical work for 30 minutes.

Then I used a rotary scrubbing machine with scr…Read More 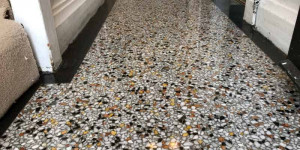 Terrazzo restoration in Lickey Worcestershire. A number of holes and chips had to be filled. The repairs were left overnight then ground smooth the next day. The floor was ground to remove the old surface. The floor was coated with a densifying solution to strengthen the Terrazzo. The next day, the Terrazzo was honed, polished to a high shine. I applied a colour-enhancing impregnating sealer to help protect the floor. 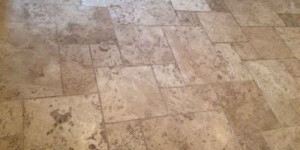 This Tumbled Travertine floor was very dirty. The natural holes in the Travertine had also filled with soil. I deep cleaned the floor with a rotary scrubbing machine ant Travertine cleaners. Then I pressure rinsed the tiles to remove more ingrained soil from the holes. The floor was laid on sand and ash, so I applied an impregnating sealer that allows moisture to pass through natural stone.