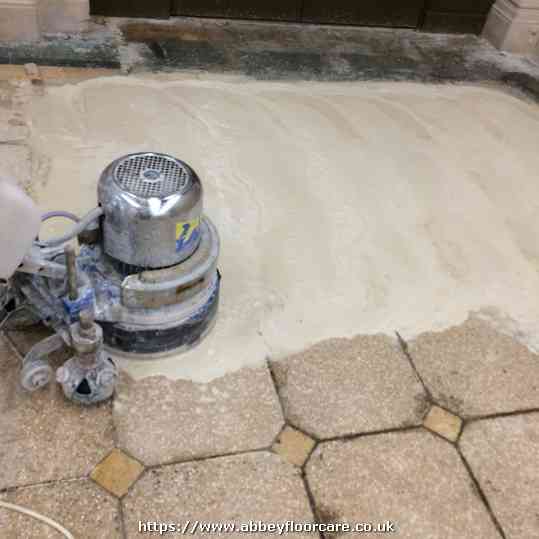 What To Do Now

Why You Will Want To Select Us

Contact Us Now! It's quick to book a quotation for your stone floor cleaning East Lothian. 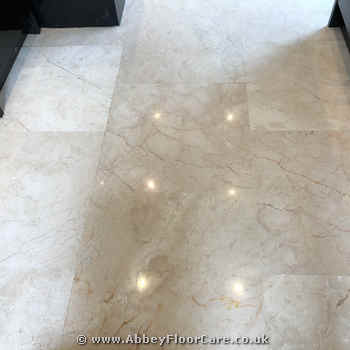 The original polish on marble will bit by bit loose its shine. The dullness is caused by tiny scratches on the surface of the marble where it's been walked over. Ultimately, the marble will need to be repolished.

Diamonds are used to eliminate the scratches and damage and restore the surface.

If your floor happens to be put down leaving uneven tiles, this is certainly referred to as “lippage”. The only method to make a marble tile floor smooth is by grinding away the lippage and uneven tile edges. Marble floor grinding is a specialist job, that gives incredible results.

Following grinding, the grout sits will be level with the marble tiles. The floor will look like just one area of marble.

It is faster and easier to mop a smooth floor than a jagged floor. A smooth surface marble floor does not have grout depessions to hold soil. If your marble has chips and cracks, we could repair them with resin fillers, closely colour matched to the marble. The restoration needed will be based on the state of your marble floor.

Find out more about our Marble Polishing Musselburgh service and also our entire professional cleaning  options or Book a Quote. 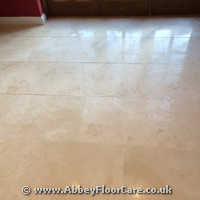 A Travertine floor is characterised by a honeycomb structure, with a lot of holes. Travertine floor tiles qre available in a number of finishes, smooth honed, tumbled and polished. The original hole filler often comes away, letting the holes fill with soil, dirt and mopping water.

Working to the highest standard, Travertine floor restoration businesses use use a variety of machine scrubbing, hand scrubbing and pressurised rinsing to remove old sealers and ingrained soil. 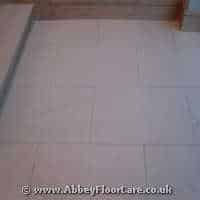 Progressively a Limestone floor will loose its original shine. The dullness is due to tiny marks on the surface of the stone where it's been walked on. Limestone Polishing is the best way to revive the initial polish. We employ specialized equipment and diamond tooling to polish the Limestone.

Following grinding, the tiles and grout are at the exact same level. It is faster and easier to maintain a smooth floor than a bumpy floor. There will be no grout channels to capture soil. If your Limestone has cracks or chips, we are able to repair them with resin fillers, colour matched with the Limestone. After we have assessed the floor, we will advise the best Limestone restoration process. 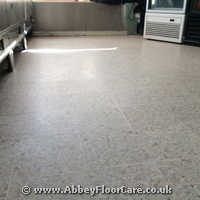 Terrazzo is made from natural stone segments set in a cement or epoxy base and it is either poured on site or cast as tiles. Sooner or later, Terrazzo will lose the original finish. Surface damage is caused by wear scratches and surface damage.

Eventually, the Terrazzo will have to be polished to the highest standard. Diamonds get rid of the surface damage and restore the original Terrazzo shine. Our Terrazzo sealers will help prevent further soil issues. 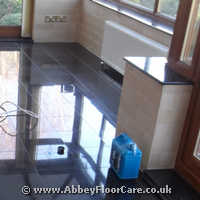 As a result of its hardness, granite requires expert renovation. We have the experience and equipment to revive your granite floor. to the highest standard. 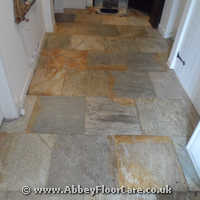 Sandstone is produced primarily of quartz, iron oxide, silica and calcium based deposits so it is a very durable stone. Whilst sandstone is durable it is porous, so dirt gets caught in the surface and is difficult to remove.

Professionals use rotary brushing machines, sealer removers and pressure rinsing to completely clean the sandstone Then we apply a long-lasting sealer that makes your floor more straightforward to clean. We will advise the appropriate restoration service. 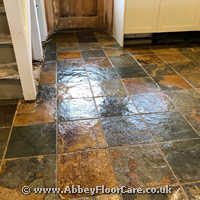 Slate flooring is just one of the most well known kinds of natural stone, because it requires less maintenance and cleaning. Though slate has a low porosity, it's going to nevertheless partly absorb and oil based spills, making frustrating marks.

We use specialist sealer removal treatments and scrubbing machines to eliminate the layers of old sealer. Once our professional cleaning is finished,finally, we apply a lasting sealer which also makes your floor more straightforward to clean.

If you like a smooth floor, we are able to grind a floor, subject into the slate being ideal for grinding. 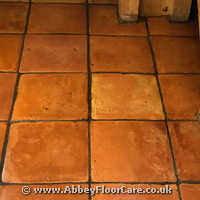 Whilst we are able to seal Terracotta with Linseed oil and wax, we advise a tough synthetic sealer which will last for years, with minimum maintenance. 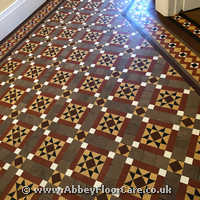 Victorian Clay Tiles are installed in a lot of Victorian and Edwardian hallways.

The foremost properties of Victorian tiles include natural clay colours and a matt finish.

A large number of these floors were initially sealed and then covered with carpet or lino.

After cleaning an impregnating sealer is used to enhance the colours and protect the floor tiles. The mat finish can be polished through the use of a wax or topical sealer. 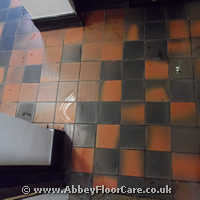 Quarry tiles are very durable although they still have problems with a couple of issues.

Years of ground in dirt and old sealers often leads many people to consider their floor is beyond repair, but that’s often far from the truth.

A specialist clean and reseal can be just enough to restore a quarry tile floor. Once the quarry tiles are cleaned they should be sealed to give many years of life. 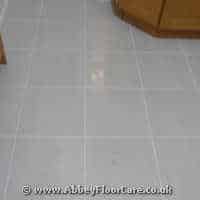 Porcelain is becoming an extremely sought after option to standard ceramic tiles and natural stone.

This helps make Porcelain a lot more resistant to stains and simpler to keep up than standard ceramic tiles.

If the blend of ingredients isn't correct, the top of tiles may be porous. just like natural stone floors. If you've got an inferior Porcelain, surface soil may be hard to remove.

We can remove ingrained dirt using equipment designed to go into the microscopic pits holding the soil.

We can help minimize the dirt using Porcelain sealers.

If you have got a solid colour Porcelain, we could re-surface the tiles by Grinding and re-polishing. 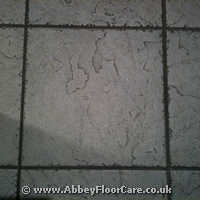 This is as the tile surface is commonly glazed.

But, professional tile and stone cleaning will certainly give your floor a cleaner finish.

A specialist sealer will be applied following the the cleaning process. Tile sealing helps make mopping much easier and will help protect against spills.

Learn more about our Ceramic Tile And Grout Cleaning Kingston cleaning method and also our entire professional stone floor cleaning service or Book a Quote employing a specialist that will work with the highest standard in natural stone.

Natural tone floor tile cleaning is hardly ever just cleaning, there is frequently additional restoration needed. Restoring stone and tile floors usually involves a range of procedures. Stone and tile floors suffer from traffic wear and damage, because people walk over them. The most common issue we experience during stone restoration is fatty soil scuffed into the surface creating a lifeless, unattractive polish. Highly polished floors like granite, marble and terrazzo show surface damage sooner once the shiny finish dulls from traffic scratches. Porous tile and natural stone sealed with a surface sealer will eventually sustain wear damage.

We get rid of acid etching and scratching by grinding and honing.The good thing about natural stone is the fact that it can be resurfaced, to reveal a new finish.

Gradually a stone floor will loose the original gloss. The loss of sparkle is caused by foot traffic scratches and surface deterioration. The best way to bring back the original finish is through polishing the stone.

On marble, Granite, Terrazzo, Polished Limestone and Polished Travertine floors, the highest standard natural diamonds are used to get rid of the surface wear and rebuild the original luster. Clay, Honed Travertine, Sandstone, Slate & Honed Limestone tiles get their polish from a surface sealer. Polish stripping chemicals are used to get rid of all traces of the old sealer, after which a new gloss-finish sealer is applied.

Stone Floor Cleaning East Lothian
And Throughout The Country

East Lothian ; Scots: East Lowden; Scottish Gaelic: Lodainn an Ear is one of the 32 council areas of Scotland, as well as a historic county, registration county and lieutenancy area .

The county was also known as Haddingtonshire .

In 1975, the historic county was incorporated for local government purposes into Lothian Region as East Lothian District, with some slight alterations of its boundaries .

East Lothian lies south of the Firth of Forth in the eastern central Lowlands of Scotland .

It borders Edinburgh to the west, Midlothian to the south-west and the Scottish Borders to the south .

Its administrative centre and former county town is Haddington while the largest town is Musselburgh .

Haddingtonshire has ancient origins and is named in a charter of 1139 as Hadintunschira and in another of 1141 as Hadintunshire .

Three of the countys towns were designated as royal burghs: Haddington, Dunbar, and North Berwick .

As with the rest of Lothian, it formed part of the Anglo-Saxon kingdom of Bernicia and later the Kingdom of Northumbria .

Popular legend suggests that it was at a battle between the Picts and Angles in the East Lothian village of Athelstaneford in 823 that the flag of Scotland was conceived .

From the 10th century, Lothian transferred from the Kingdom of England to the authority of the monarchs of Scotland .

It was a cross-point in battles between England and Scotland and later the site of a significant Jacobite victory against Government forces in the Battle of Prestonpans .

In the 19th century, the county is mentioned in the Gazetteer for Scotland as chiefly agricultural, with farming, fishing and coal-mining forming significant parts of the local economy . 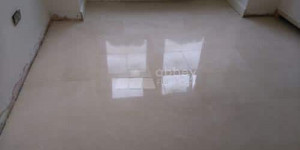 Dull marble tiles can be really frustrating; soil gets trapped in the scratches, no amount of mopping gets them clean and it looks as though you are neglecting your floor.

This marble polishing Tooting project was no exception and our customer was desperate to bring the shine back to her floor.

The marble was dull, there were lots of etch marks, the grout was soiled and my client had dulled tile edges when trying to clean the grout. 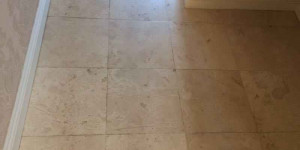 The Travertine floor was over 10 years old and the original surface finish had worn away, leaving a dull, porous finish. There were also lots of holes filled with soil.

I started cleaning the floor using a strong Travertine cleaner and a rotary scrubbing machine. The cleaning was followed up with pressurised water rinse equipment to lift the emulsified soil away from the floor.

Then I filled the holes with resin and grout fillers.

Once the grout dried, I sealed the Travertine with a high-quality Travertine sealer.

The Difference Between Marble Honing And Polishing 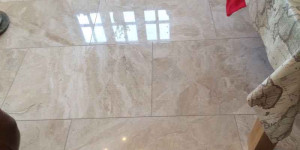 This marble floor in had lost the surface shine. The loss of shine was caused by household pets carrying sand and soil from the large garden and sandpit. I lightly ground, honed and polished the floor to a high shine. Finally, I applied a high-quality impregnating sealer. 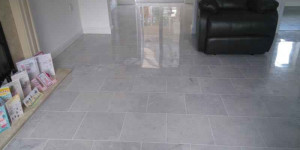 This marble floor had lost its shine and had surface scratches. On inspection, there was also a lot of lippage over 2mm high. I started by diamond grinding the marble to remove the lippage and prepare the floor for honing. Diamond honing removed the scratches created by grinding and prepared the floor for marble polishing. I polished the floor to a deep shine and then applied a high quality impregnating sealer. My client was really pleased with the results.