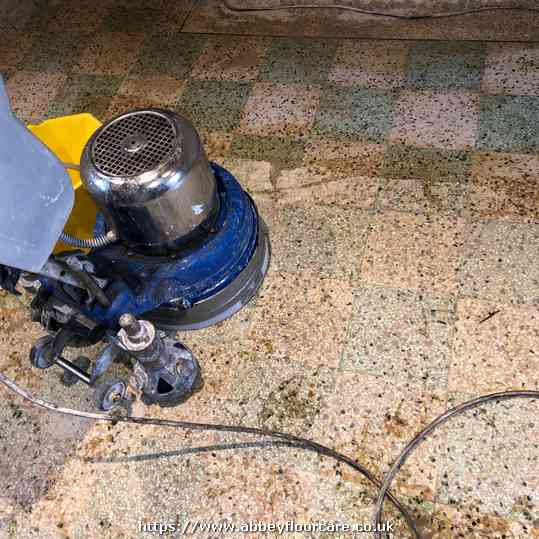 Provide The Size And Type Of Stone

We Shall Respond Quickly

Exactly Why You Can Trust Abbey

Contact Us Now! Get a stone for cleaning Edinburgh quote now. 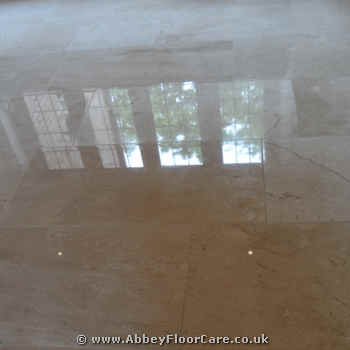 Marble eventually looses its initial finish. Scratching and etch damage build and take off the initial shine. The best way to revive the finish is by polishing the floor.

We use industrial diamond polishing to re-surface the tiles and restore the initial shine.

It really is pretty much unachievable to lay a marble floor really flat. A marble floor should be leveled by grinding off the lippage and uneven tile edges. Grinding marble floor tiles should really only be carried out by experts.

Following grinding, the marble will sit at the same level the grout. The floor will look like just one area of marble.

Mopping a ground, honed and polished marble floor is much like cleaning an individual bit of glass. There will be no grout channels to capture dirt. Chips and cracks can be filled with colour matched resin fillers. The restoration needed is going to be decided by the state of your floor.

Learn more about our Marble Polishing Edinburgh work and our extensive professional cleaning  options or Book a Quote. 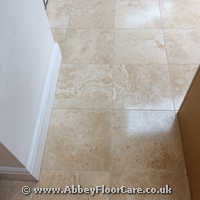 A Travertine floor has a permeable structure, with a lot of holes. Travertine floor tiles will come in many different finishes, polished, smooth honed and tumbled. As the travertine wears, the hole filler comes away, and the holes fill with dreadful soil, dirt and mopping water.

Working to the highest standard, restoration businesses use rotary scrubbing equipment and pressure rinsing to clean the Travertine floor. 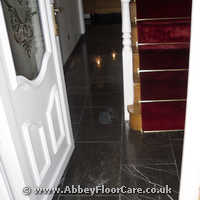 An initial appearance on Limestone will slowly loose its shine. This damage to the surface is caused by foot traffic scratches and etch marks Gradually, the tiles will have to be re-polished. Diamonds are used to remove the marks and scratches and recover the original finish.

It's pretty much unachievable to lay a Limestone floor really flat. A Limestone tile floor can be leveled by grinding off the lippage and uneven tile edges. Grinding Limestone must be done by restoration professionals. The Limestone will get the look of becoming an individual area of stone.

Following grinding, the grout sits at the same level as the the Limestone. A smooth Limestone finish is much easier mop. There are no uneven grout lines to trap soil. Cracks, chips and hole repairs tend to be an element of the restoration work. The type of restoration needed should be based on the state of your floor. 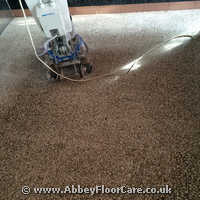 Terrazzo is made by mixing chips made from marble, granite, quartz, or glass chips into a cement or epoxy medium . Terrazzo ultimately loses the original finish. The surface damage is caused by wear scratches and surface damage.

Terrazzo Polishing is definitely the best way to bring back the original finish to the highest standard. Diamonds eliminate the surface damage and restore the original Terrazzo shine. Our Terrazzo sealers will help prevent further soil problems. 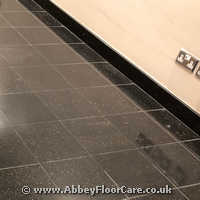 Granite is a really popular stone flooring. Granite is an extremely hard-wearing tile flooring, perfect for heavy traffic areas. A surface on Granite lasts longer than other stones or tiles.

Few stone restoration companies restore Granite, because it is so hard and hard to restore. We offer a complete selection of granite cleaning, polishing, restoration and sealing services. to the highest standard. 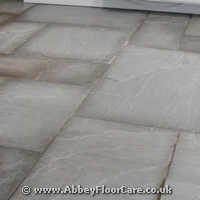 Sandstone is made primarily of quartz, iron oxide, silica and calcium based deposits therefore it is a very durable stone. Sandstone can end up with ingrained soil making it look dull and hard to clean.

We use dedicated sealer removers, rotary scrubbing equipment and pressure rinsing to eliminate the layers of old sealer We then use specialist sealers that last for many years not just months. We will advise the appropriate restoration service. 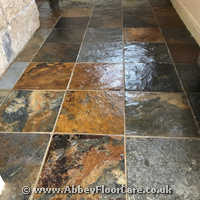 Slate is a tremendously popular floor and wall tile because of its low porosity and the many textures and varieties of Slate available. Slate needs regular sealing to prevent spills and soil marking the finish.

We use a mix of machine and hand scrubbing to remove all traces of old dirty sealers and clean the slate. After our professional cleaning is complete,finally we use a long-lasting sealer to make the floor more straightforward to maintain.

If you prefer a smooth finish, we could grind the tiles, but we have to assess the slate before grinding. 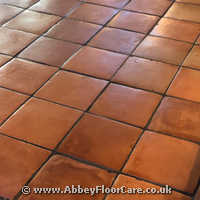 Terracotta is amongst the most permeable floors which we run into but has been used for floor tiles for thousands of years.

Terracotta can quickly start to show marks, particularly if the current sealer has worn down.

Cleaning and restoring terracotta tiles starts off with stripping the previous polish, sealers and ingrained soil with specialised sealer removers and cleaning chemicals.

We can re-wax the Terracotta or use a hard wearing synthetic sealer that is much simpler to look after. 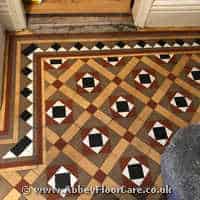 The tiles have a matt finish and get their colour through the clay used in their manufacture.

Owing to their age, these floors have had lots of wear and can have layers of different sealers.

With their age, many of these floors can have a range of coating residues, that really need expert cleaning

After cleaning, a colour intensifying sealer is applied to bring back the natural colours in the tiles. If you prefer a sheen or gloss finish a surface sealer or wax may be used. 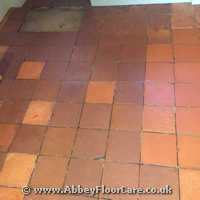 Quarry tiles have been a common fixture in cooking areas and for indoor flooring for decades.

Years of ground in dirt and old sealers can lead many people to believe their tile floor is past repair, but that is often not the case.

We can remove the layers of old coatings and dirt, providing you with a pleasant new finish. As soon as the quarry tiles have been cleaned they can be sealed to provide several years of life. 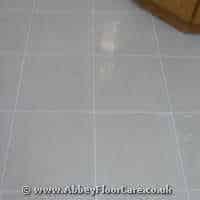 Porcelain is a kind of ceramic tile.

Porcelain is extremely resistant to moisture, so spillages can't seep into the tile and cause stains.

Some inferior porcelains have microscopic holes that may absorb soil just like natural stone floors. If you've got a substandard Porcelain, surface soil may be hard to remove.

You need specialist machines and cleaning solutions to get rid of this soil.

We can help minimize this soil with Porcelain sealers.

If you have got a trough-colour Porcelain, we can re-surface the tiles by Grinding and re-polishing. 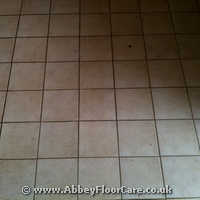 A glassy finish is a lot easier to clean.

However, professional tile and stone cleaning and restoration will give a better appearance.

Once your tile is cleaned we'll apply a tile sealer. A sealed ceramic tile is a lot easier to clean and helps reduce staining.

Discover more about our Ceramic Tile And Grout Cleaning Balerno cleaning method in addition to our extensive professional stone floor cleaning service or Book a Quote with a specialist that operates at the highest standard in stone and tile.

Natural stone floor cleaning frequently will incorporate more restoration services. Natural stone floor restoration covers a number of services. All stone and tile floors have problems with wear and surface damage. In many cases, soil, stains and traffic scrapes ruin the floor finish, hence the need to have stone restoration. Polished floors like granite, marble and terrazzo reveal wear a lot faster as the lustre dulls from foot traffic scratches. Wear problems eventually has an effect on porous natural stone such as Sandstone, Travertine, Terracotta & Limestone, which are usually coated with a film-forming surface sealer.

We take away acid etching and scratches by grinding and honing.The beauty of natural stone is that it could be re-surfaced, to reveal a brand new finish.

Steadily a stone floor will loose the initial gloss. Scratches and acid etching spots developing and stripping the initial polish. Polishing is the the best way to regenerate a sparkle.

Our team use the highest standard diamond polishing machines to hone and polish Granite, Terrazzo, Polished Limestone and Polished Travertine floors, and regain the initial finish. Sandstone, Clay, Honed Limestone, Slate & Honed Travertine tiles manage to get thier polish from a surface sealer. The most practical method to polish these tiles is through removing the old polish and apply a fresh layer of film-forming sealer.

Stone Floor Cleaning Edinburgh
And Throughout The Country

Edinburgh ;Scots: Edinburgh; Scottish Gaelic: Dùn Èideann [?t?u?n ?e?t??n??] is the capital of Scotland and one of its 32 council areas .

Historically part of the county of Midlothian interchangeably Edinburghshire before 1921, it is located in Lothian on the Firth of Forths southern shore .

The citys Palace of Holyroodhouse is the official residence of the monarch in Scotland .

The city has long been a centre of education, particularly in the fields of medicine, Scots law, literature, philosophy, the sciences and engineering .

It is the second largest financial centre in the United Kingdom after London and the citys historical and cultural attractions have made it the United Kingdoms second most visited tourist destination attracting 4 .

The city is the annual venue of the General Assembly of the Church of Scotland .

The University of Edinburgh, founded in 1582 and now one of three in the city, is placed 20th in the QS World University Rankings for 2020 .

The city is also known for the Edinburgh International Festival and the Fringe, the latter being the worlds largest annual international arts festival .

Historic sites in Edinburgh include Edinburgh Castle, the Palace of Holyroodhouse, the churches of St .

Giles, Greyfriars and the Canongate, and the extensive Georgian New Town built in the 18th/19th centuries . 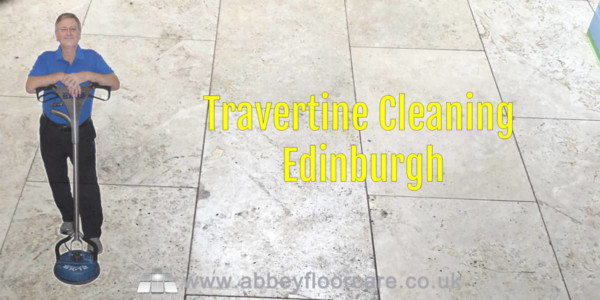 Cleaning a large area of Travertine tiles in Edinburgh. The Travertine had suffered from a lot of wear form household pets. The surface of the floor had worn exposing lots of the natural holes in the Travertine. Also, a lot of the filled holes had lost their filler.  I deep cleaned, grout filled and sealed the floors, giving a lovely clean, long-lasting and easy-to-clean finish. 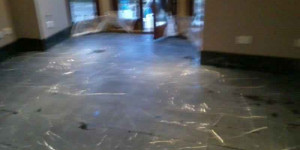 This black marble floor was badly scratched and had a lot of lippage. I ground, honed and polished the floor to a deep, lustrous shine. Then I applied a high quality impregnating sealer. My client was absolutely delighted with the marble polishing.

A Simple Guide To Cleaning Travertine

This Limestone Cleaning Thornborough project is about restoring a soiled Limestone tile floor.

The floor is 12 years old and has suffered quite a bit of wear.

Most of the floor had no sealer, therefore there was ground-in dirt in the stone which is difficult to remove.

So my client was looking for a specialist limestone cleaning service. 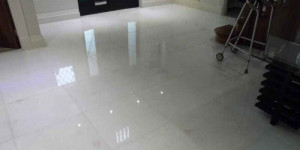 This white marble floor in had lost the surface shine in places. There were also areas of severe wear. I ground, honed and polished the floors to a deep shine. Then I applied animpregnating sealer to help protect the floor and aid cleaning. My clients were astounded with the results and really happy with my work.