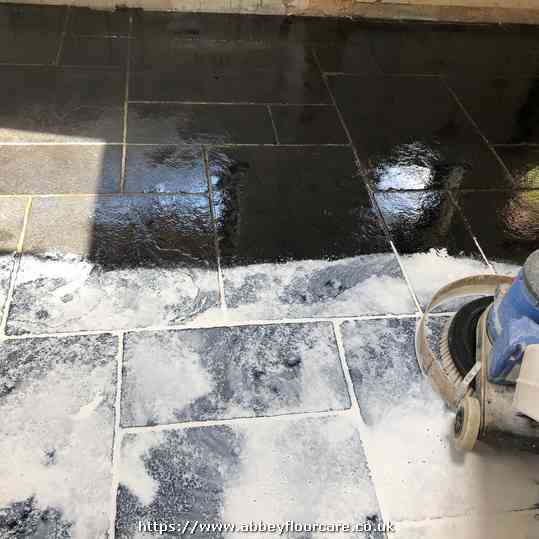 What We Do Next

We Decide On A Working Schedule

Reasons Why You Will Want To Choose Abbey Floor Care 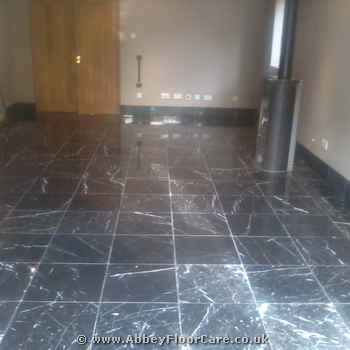 The original surface on marble tiles will slowly loose its finish. The dullness is due to tiny scratching on the surface of the stone where it's been walked over. Marble Polishing is the only way to restore the initial polish.

We use diamond polishing equipment to revive the surface.

If the tiles are not even, perfectly even this problem is known as "lippage". A marble tile floor is smoothed by grinding off the lippage and uneven edges of the tiles. Marble grinding is a professional process, giving fantastic results.

Following grinding, the marble and grout are at the same level. The marble floor will get the appearance of appearing as a single area of marble.

After grinding and polishing marble maintenance is a piece of cake, because the mop slides over the floor. Also, soil does not get stuck into the grout lines. Chips, cracks and hole repairs are often an element of the restoration service. Once we have assessed your marble floor, we can suggest on the best restoration service.

Find out more about our Marble Polishing Watford service plus our entire professional cleaning  options or Book a Quote. 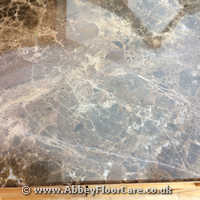 Much of the Travertine installed in the UK has a honeycomb framework with a great deal of holes. Travertine floor tilescould be supplied in a number of finishes, including tumbled, honed and polished. The initial hole filler often comes away, allowing the holes to fill with dirt and soil.

Working to the highest standard, Travertine floor restoration businesses use use a variety of machine scrubbing, hand scrubbing and pressure rinsing to remove old sealers and embedded soil. 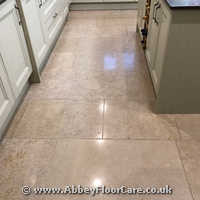 An original polish on Limestone will eventually loose its finish. Surface scratches and etch damage pile-up and take off the initial finish. Sooner or later, the Limestone will have to be repolished. We utilise specialist equipment and diamond tooling to polish the Limestone.

If the tiles are not even, even this problem is named "lippage". The only method to make a Limestone floor smooth is by grinding off the lippage and uneven edges of the tiles. Grinding Limestone should be performed by specialists. The Limestone will get a monolithic appearance as an individual area of Limestone.

Following grinding, the Limestone and grout will be at the exact same level. A smooth Limestone floor is much simpler to maintain. There will be no uneven grout lines to trap soil. Hole cracks and chip repairs are often an element of the Limestone restoration work. We can advise the correct restoration process. 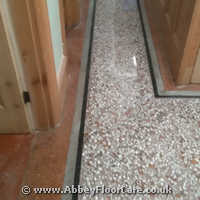 Terrazzo is an attractive yet durable flooring, thus its use as a flooring in supermarkets, airports, commercial and industrial buildings. The initial finish on a Terrazzo floor will steadily go dull. Small scratches and etching builds up and remove the initial finish.

The best way to revive the original finish is by polishing the Terrazzo to the highest standard. Diamonds are used to get rid of the surface damage and restore the initial Terrazzo shine. Our Terrazzo sealers can help minimize further soil issues. 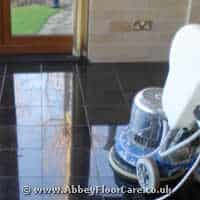 Granite is a well known stone flooring for domestic and commercial rooms. Granite is a tremendously hard material, well suited for heavy duty foot traffic areas. Granite Tile resists wear longer when compared with some other natural stones, like limestone or marble.

Granite is so hard, that many companies do not have the equipment or experience to restore granite. Our Company will restore all types of granite. to the highest standard. 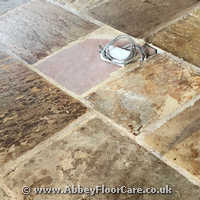 Sandstone is manufactured out of compressed sand, together with different minerals including quartz and feldspar. The voids amongst the sandstone fragments trap soil which can be hard to get rid of.

We have specialist scrubbing and rinsing machinery to eliminate the soil and old coatings, refurbishing the original sandstone appearance We then use specialist sealers that last for years not just months. After inspecting the floor, we will advise the most appropriate Sandstone restoration service. 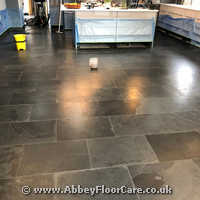 Slate flooring is among the most well known forms of natural stone, as it requires less routine maintenance and mopping. Riven slate can get a build-up of soil inside the crevices this is certainly difficult to remove.

We use a mixture of machine and hand scrubbing to get rid of all traces of previous dirty sealers and clean the tiles. When the professional cleaning is completed,finally, we use a durable sealer which also makes the floor much easier to clean.

If you prefer a smooth finish, we are able to grind the tiles, but we have to assess the slate before grinding. 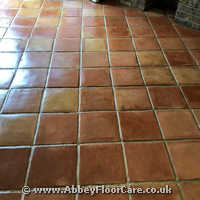 Terracotta is made of natural clay and historically has been used for roof tiles, sculptures, bricks and floor tiles.

Sealer deposits, soil and scratches may be removed with rotary scrubbing and sealer removers.

We could wax the Terracotta or employ a hard-wearing synthetic sealer that is much easier to care for. 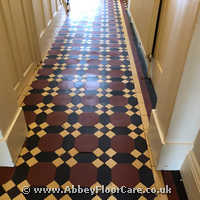 The main qualities of Victorian tiles are the natural clay colours and a matt finish.

With the changes in interior decor, these kinds of floors get carpet underlay, lino adhesive, bitumen and additional adhesive remains.

Cleaning these floors can be challenging because of the variety of old sealers and covering residues.

A colour intensifying sealer is put on after cleaning, to displace the initial colours within the tiles. The mat finish could be polished by making use of a wax or topical sealer.

Quarry tile floors were once a proud feature in terraced houses and farmhouses in the country, but some of those floors have since fallen into various states of repair.

Whilst the tiles may seem dirty and discoloured, they’re very robust and can look as good as new after a suitable clean.

We can eliminate the layers of old selaers and soil, providing you with a lovely new finish. After cleaning, the tiles should be finished with a long-lasting sealer. 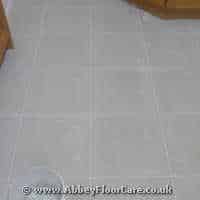 Porcelain is classified as a ceramic, but created with different materials to conventional glazed tiles.

Some inferior porcelain has tiny holes which will absorb soil just like natural stone floors. It can be difficult to remove this soil.

You need professional machinery and cleaning solutions to get rid of this soil.

After cleaning, we use specialist Porcelain sealers to avoid this problem.

If the porcelain is a solid colour, we are able to resurface the porcelain, just like granite or marble restoration. 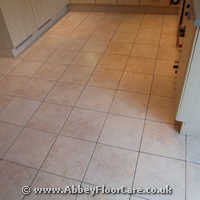 We always use an expert tile sealer after cleaning. A sealed ceramic tile is simpler to mop and a sealer helps reduce staining.

Read more about our Ceramic Tile And Grout Cleaning Letchworth Garden City cleaning method and our substantial professional stone floor cleaning systems or Book a Quote utilizing a business that will work at the highest standard in stone and tile.

Most stone and tile flooring has grout. Grout is generally softer than stone and much more susceptible to abrasive and chemical wear and tear. Cracks, chips and hole repairs will often be a part of the restoration work.

Resurfacing removes surface damage from etch spills and surface marks.The good thing about natural stone is that it could be re-surfaced, to show a new fresh finish.

Natural stone floors finally loose their unique authentic gloss. Scratch damage and etch spill marks building up and getting rid of the original finish. Polishing will be the best way to recover a polish.

Our company use the highest standard diamond polishing machinery to re-surface Granite, Terrazzo, Polished Limestone and Polished Travertine floors, and return the original finish. Gloss sealers create the shine on Honed Travertine, Honed Limestone, Sandstone, Slate & Clay tiles. Sealer stripping products are applied to take off all remnants of the old sealer, after which a brand new gloss sealer is applied.

Stone Floor Cleaning Hertfordshire
And Throughout The Country

Hertfordshire ; often abbreviated Herts is one of the home counties in southern England .

It is bordered by Bedfordshire and Cambridgeshire to the north, Essex to the east, Greater London to the south, and Buckinghamshire to the west .

For government statistical purposes, it is placed in the East of England region .

The county derives its name from a hart stag and a ford, used as the components of the countys coat of arms and of the flag .

Hertfordshire County Council is based in Hertford, once the main market town .

Elevations are higher in the north and west, reaching more than 800 feet 240 m in the Chilterns near Tring .

The county is approximately the drainage divide of the River Lea and the Colne; both flow south, and both are accompanied by a canal .

Hertfordshires undeveloped land is mainly agricultural and much is protected by green belt .

Hertfordshire is well-served with motorways and railways, providing good access to London, the Midlands and the North .

The largest sector of the countys economy is services . 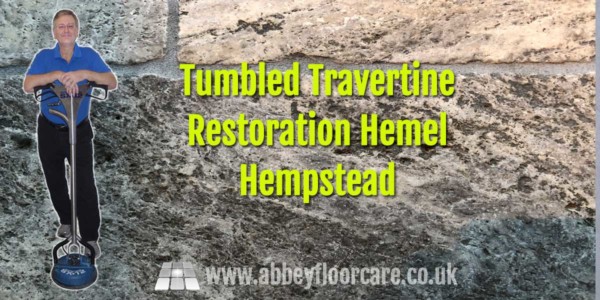 This Tumbled Travertine floor in Hemel Hempstead had cracks, scratch marks, ingrained soil and open holes across the floor. I repaired the cracks with two-part resin. I removed the scratched with diamond honing pads. I deep cleaned and pressure rinsed the Tumbled Travertine. After cleaning, I filled the holes, one tile at a time, with Manhattan 2000 Mapei Grout. I left the floor to dry overnight. I applied two coats of CeeTech Sealer to give the floor an easy-to-clean finish that will last for years. 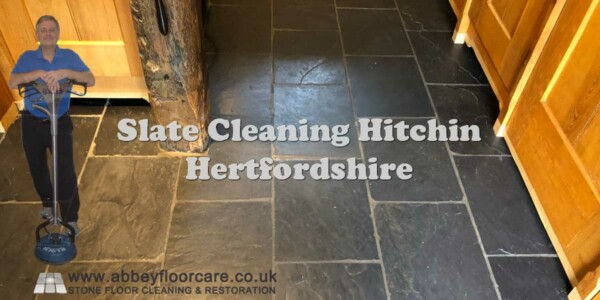 This slate floor cleaning Hitchin project came about because my client was looking for a long term cleaning solution for her slate floor tiles. The tiles were originally sourced from Fired Earth over 15 years ago. My client had regularly cleaned and sealed the tiles with Lithofion Slate Seal. In recent years, cleaning and sealing the slate was becoming more difficult and they were looking for a longer life sealing solution.

I started by protecting all painted surfaces because the sealer removed for this kind of sealer will also remove paint and varnish from furnishings.   I applied the sealer remover and left it for around 30 minutes to allow… 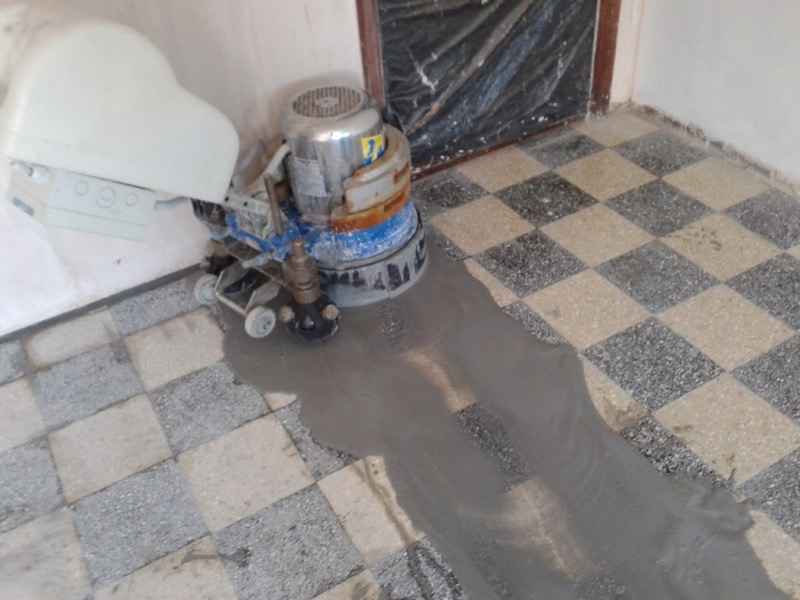 This is a beautiful Terrazzo floor with seashells rather than marble chips. My client wanted the floor ground to remove the lippage and then polished to a high sheen. After grinding and polishing the floor, I applied a high quality impregnating sealer.

Creating A Beautiful Finish On Limestone 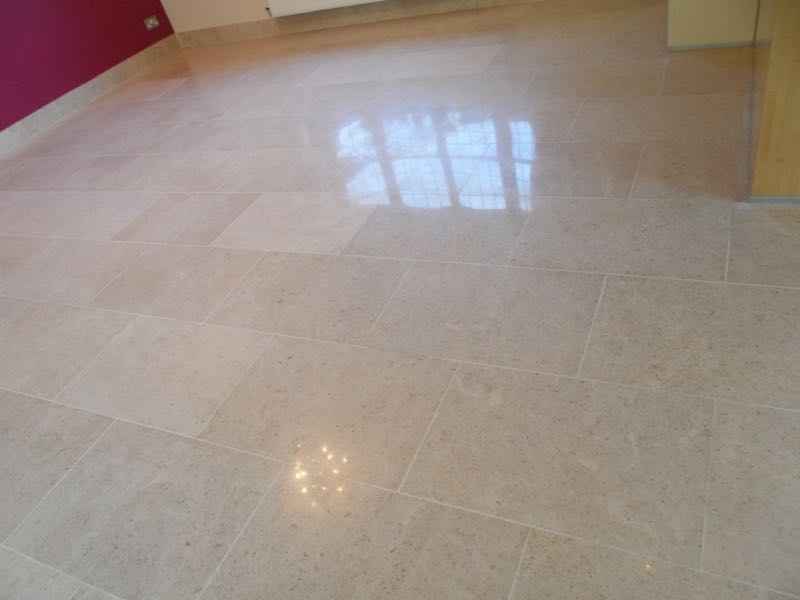 My client was looking for their Limestone floor to be ground and polished to a deep shine. He had sample work from other contractors, but they used burnishing pads, which gave an orange peel effect to the surface of the Limestone. I ground and polished the floor using professional diamond grinding resin disks, which gave a smooth finish, free of imperfections. I then sealed the floor with a high-quality impregnating sealer. My client was exceptionally happy with the results of my work. 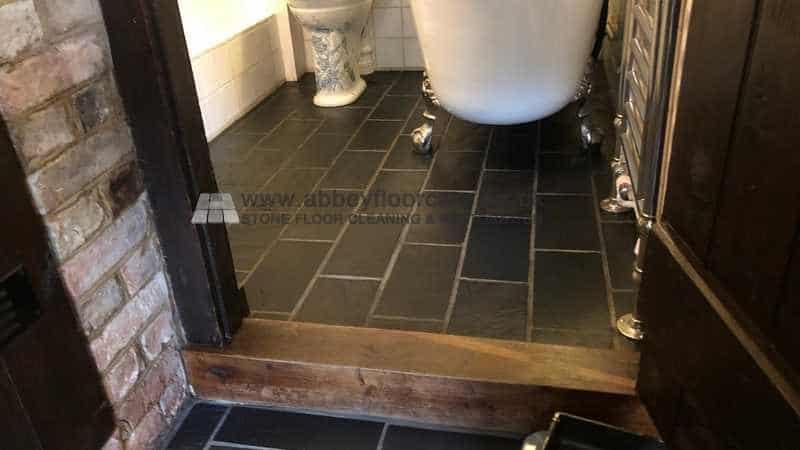 This slate floor cleaning Hitchin project came about because my client was looking for a long term cleaning solution for her slate floor tiles.

The tiles were originally sourced from Fired Earth over 15 years ago. My client had regularly cleaned and sealed the tiles with Lithofion Slate Seal.

In recent years, cleaning and sealing the slate was becoming more difficult and they were looking for a longer life sealing solution.

I started by protecting all painted surfaces because the sealer removed for this kind of sealer will also remove paint and varnish from furnishings.

Owing to Arthritis I can no longer use the equipment needed for Worktop and Stone Floor Grinding Honing or Polishing  (Marble, Limestone,  Granite, Porcelain). If you are near London or Glasgow/Edinburgh, I have colleagues who can undertake this work and I will be happy to pass your enquiries on to them.