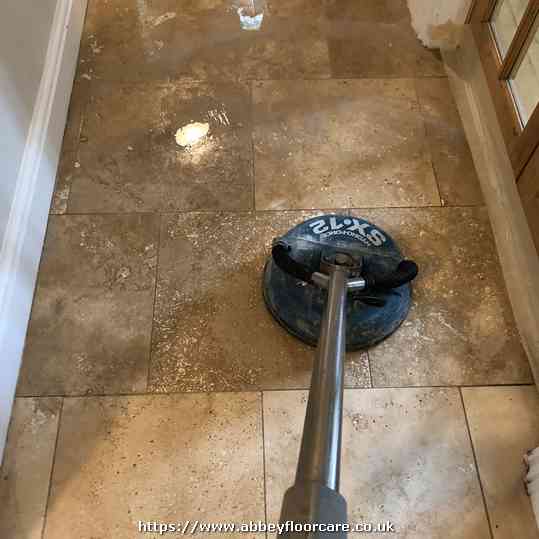 You Can Expect To Get A Quick Reply

Reasons Why You Really Should Select Us 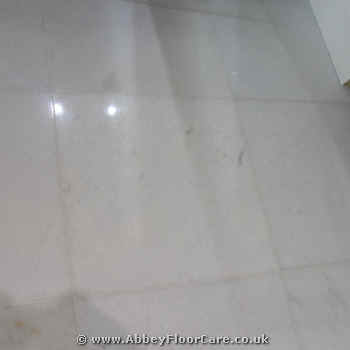 Marble ultimately looses the original surface. Scratches and etch marks build and remove the initial surface. Marble Polishing is the only way to revive the polish.

We use industrial diamond polishing machinery to bring back the initial shine.

If the tiles are not even, perfectly even this problem is named "lippage". The only way to make a marble tile floor perfectly smooth is by grinding off the lippage and uneven edges of the tiles. Marble tile grinding is a specialist process, providing stunning results.

Following grinding, the marble be at the same level the grout. The marble will get a monolithic appearance as a single slab of stone.

An even marble floor is much simpler clean. There are no grout channels to capture soil. Hole cracks and chip repairs are often an element of the restoration work. After checking out the marble, we can advise the best marble restoration service.

Learn more about our Marble Polishing London services and also our substantial professional cleaning  solutions or Book a Quote. 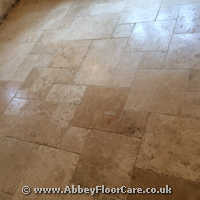 A Travertine floor is characterised by a honeycomb structure, with lots of holes. Travertine floor tilescan be supplied in a number of finishes, including polished, honed and tumbled. As the travertine wears, the hole filler falls out, and the holes fill up with unpleasant soil, dirt and mopping water.

Working to the highest standard, restoration service providers have rotary scrubbing machinery and pressurised rinsing to wash the Travertine floor. 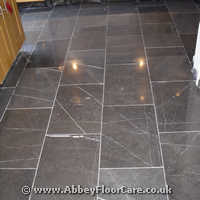 The initial appearance on Limestone tiles will eventually loose its shine. Scratching and etch marks pile-up and remove the initial surface. Before long, the floor will have to be repolished. We use diamonds to take away the marks and scratches and bring back the finish.

If the tiles are not even, even this disorder is referred to as "lippage". We can grind off the uneven tile edges, making a floor surface flat. That is an involved process nevertheless the results are breathtaking. The floor will appear like an individual area of stone.

Following grinding, the Limestone tiles be flush with the grout. It is easier to maintain a smooth, sleek Limestone than a bumpy floor. There are no uneven grout deressions to trap soil. If your Limestone has cracks and chips, we are able to repair them with resin fillers, colour matched to the Limestone. We will recommend the correct Limestone restoration service. 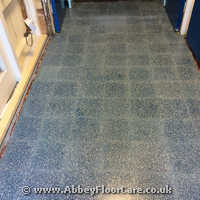 Terrazzo is an appealing and hard-wearing flooring, hence its use as a flooring in supermarkets, airports, commercial and industrial buildings. With time, Terrazzo will end up dull and lose its finish. The surface damage is caused by traffic scratches and surface damage.

The best way to restore the initial finish is through polishing the Terrazzo to the highest standard. Diamonds take away the surface damage and restore the original Terrazzo shine. Our Terrazzo sealers will help avoid further soil problems. 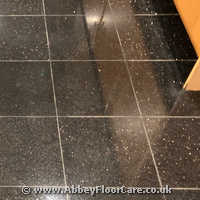 You can find granite in a lot of domestic homes and buildings. Granite is a tremendously hard wearing stone flooring, well suited for heavy foot traffic areas. A surface on Granite lasts longer than other stones or tiles.

Granite is so hard, that many companies don't have the equipment or experience to revive granite. Our technicians can restore all forms of granite flooring. to the highest standard. 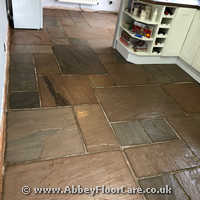 Sandstone floor tiles appear in several different shades of brown, red, yellow and cream. Old sandstone can be covered with many different old coarings and trapped dirt, so ultimately, it really needs professional cleaning and sealing.

There are professional wax removers, rotary scrubbing equipment and pressurised rinsing to remove the layers of old sealer Following cleaning we put on hard-wearing sealers. Once we look over your floor, we can give you advice from the best restoration process. 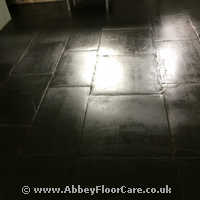 Slate floors look fantastic due to their textured appearance and vibrant colours. We are commonly called to restore slate when it has layers of old sealer with embedded soil, so the surface looks worn and soiled.

We use a mix of machine scrubbing and hand scrubbing to remove all traces of old soiled sealers and clean the tiles. After the professional cleaning is finished , we leave the floor to dry, then use a durable, easy to clean sealer.

If you have a suitable slate, it could be ground smooth, making it much easier to clean. 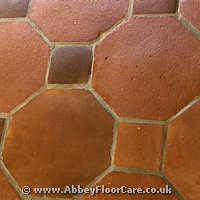 Conventional Terracotta sealers need frequent maintenance and re-sealing, if they're not taken care of, the surface will start to get dirty and become porous.

Cleaning and restoring terracotta tiles commences with getting rid of the old polish, sealers and ingrained soil with specialist coating removers and cleaning chemicals.

We could re-wax the Terracotta or use a hard wearing synthetic sealer that is much simpler to look after. 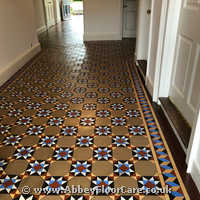 The foremost characteristics of Victorian tiles are the natural clay colours and a matt finish.

Because of how old they are, these floors have experienced a lot of wear and often have layers of different sealers.

Cleaning these floors could be challenging due to the range of old sealers and residues.

After cleaning, a colour intensifying sealer is applied to bring back the oroginal colours in the floor. Topical sealers and waxes can give a floor a sheen or glossy finish. 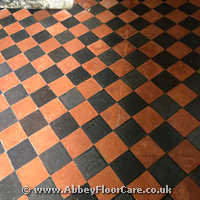 Quarry tiles are extremely are particularly durable however they still have problems with a number of issues.

Years of ingrained soil and old sealers can lead many people to consider their floor is beyond repair, but that’s often far from the truth.

A professional clean and reseal is often enough to restore a quarry tile floor. If the tiles are laid on sand, ash or lime, put on sealers that enable the free movement of moisture. 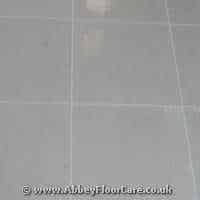 Porcelain is classified as a ceramic, but created with alternative ingredients than standard ceramic tiles.

Porcelain is extremely resistant to moisture, and so spillages are not able to seep into the tile and result in stains.

Inferior porcelain has microscopic holes that may absorb soil similar to natural stone floors. It can be hard to remove this soil.

Solid colour Porcelain Tiles can also be ground and polished, just like Granite or Marble.

Find out about our Porcelain Tiles Cleaning Hammershith floor restoration service and our entire professional cleaning treatments or Book a Quote. 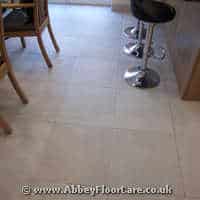 Soil and dirt are often on the surface of the ceramic tile.

Nonetheless, you are going to still get a better finish with specialized materials and equipment.

Learn more about our Ceramic Tile And Grout Cleaning Hammershith cleaning method in addition to our wide-ranging professional stone floor cleaning work or Book a Quote employing a specialist that operates with the highest standard in stone and tile.

Acid etching and scratches are generally taken away by grinding and honing.The beauty of natural stone is the fact that it could be re-surfaced, to show a new fresh finish.

Natural stone floor tiles eventually loose their unique original shine. The lack of gloss is caused by traffic scrapes and surface deterioration. The best way to revive the first finish is through polishing the natural stone.

We use the highest standard diamond polishing equipment to restore the original shine on Granite, Terrazzo, Polished Limestone and Polished Travertine floors. Slate, Clay, Honed Travertine, Sandstone & Honed Limestone tiles get their polish from a surface sealer. Polish removing substances are used to take off all remnants of the old sealer, and then a new gloss-finish sealer is applied.

Stone Floor Cleaning London
And Throughout The Country

London is the capital and largest city of England and the United Kingdom .

The city stands on the River Thames in the south-east of England, at the head of its 50-mile 80 km estuary leading to the North Sea .

London has been a major settlement for two millennia .

Londinium was founded by the Romans .

The City of London, Londons ancient core and financial centre ? an area of just 1 .

9 km2 and colloquially known as the Square Mile ? retains boundaries that closely follow its medieval limits .

[note 1] The adjacent City of Westminster has for centuries been the location of much of the national government .

London is governed by the mayor of London and the London Assembly .

[note 2]London is one of the worlds most important global cities .

It is one of the largest financial centres .

In 2019, London had the highest number of ultra high-net-worth individuals in Europe .

And in 2020, London had the second-highest number of billionaires of any city in Europe, after Moscow .

Londons universities form the largest concentration of higher education institutes in Europe, and London is home to highly ranked institutions such as Imperial College London in natural and applied sciences, and the London School of Economics in social sciences .

London has a diverse range of people and cultures, and more than 300 languages are spoken in the region .

Its estimated mid-2018 municipal population corresponding to Greater London was roughly 9 million, which made it the third-most populous city in Europe .

Greater London Built-up Area is the fourth-most populous in Europe, after Istanbul, Moscow, and Paris, with 9,787,426 inhabitants at the 2011 census .

The London metropolitan area is the third-most populous in Europe, after Istanbul and the Moscow Metropolitan Area, with 14,040,163 inhabitants in 2016 .

The London Underground is the oldest underground railway network in the world . 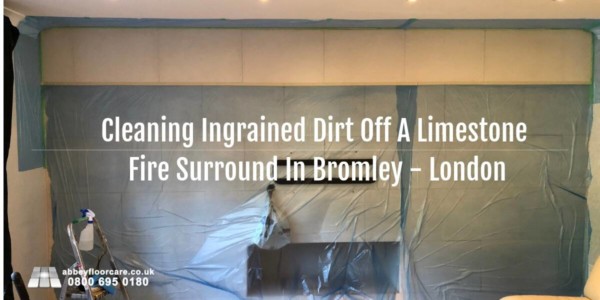 Over the years, his Limestone wall in Bromley had absorbed airborne oil and soils. Some areas had wipe marks where decorators tried to clean off paint spills.  I used limestone cleaners to remove the ingrained soil. I applied a protective film to the areas of the wall I was not working on. The film stopped slurry drying into the stone. When all the wall was clean, I applied an impregnating sealer.  My client was very pleased with the work, it came up really good. I recommended they dry sweep the wall monthly to stop a build-up of airborne soils and damp mop once every three months 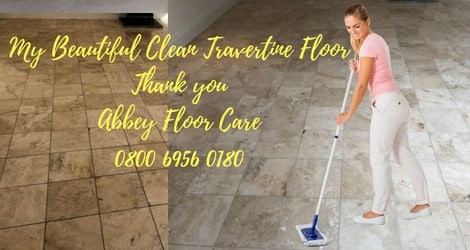 A large Travertine floor in Blackheath London with ingrained soil and a lot of cracks from movement in the subfloor. The Travertine cleaning project, had three principal objectives.

The homeowners were delighted with the results and commented that many of the crack repairs blended into the pattern of the Travertine, making them less noticeable. 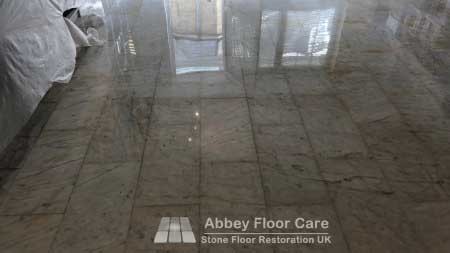 This marble floor had years of wear, with plenty of surface damage and scratches. There was also a lot of lippage (uneven tiles) on the floor. So the floor had to be ground smooth with metal diamond tooling before it could be honed and polished to a beautiful shine. finally, I applied an impregnating sealer to help protect the floor. My client was "over the moon" with the results. 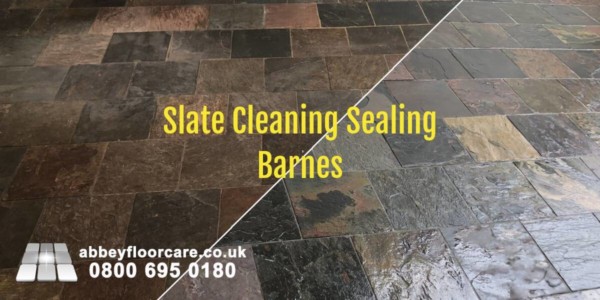 This Slate Cleaning Barnes project demonstrates how well old slate can look when professionally cleaned and re-sealed. There was quite a lot of soiled sealer residue to remove, which took me 2 days. I left the slate overnight to dry and applied a film-forming sealer. The sealer made the floor look beautiful and has a long-lasting finish.