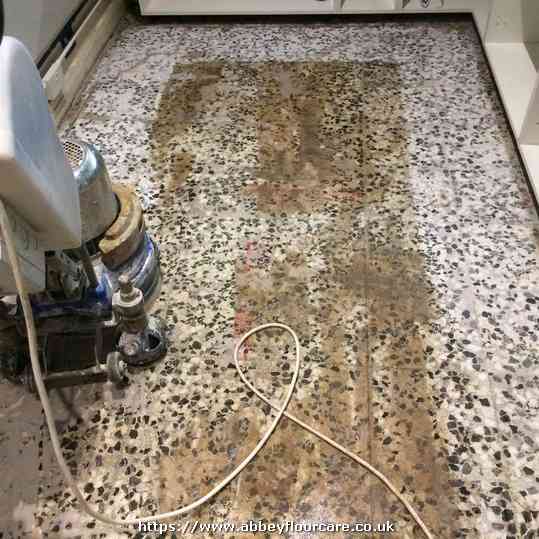 Give The Size And Type Of Stone

We Shall Reply Quickly

Reasons Why You Really Should Choose Us

Contact Us Now! It's straight forward to get a quotation for your stone floor cleaning Pembrokeshire. 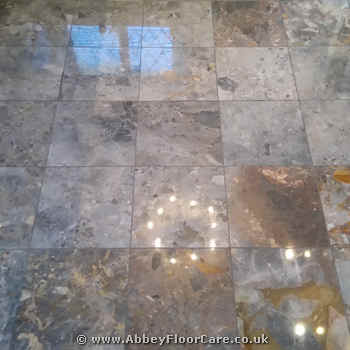 In the long run, Marble will be dull and loose its finish. The dull appearance is brought on by tiny scratching on the surface where it's been walked over. Gradually, your marble floor will have to be repolished.

After grinding, the marble tiles will sit at the same level the grout lines. The marble looks monolithic, appearing to be produced from a single slab of stone.

A smooth marble finish is much simpler to keep. Also, soil doesn't get stuck within the grout lines. Marble floor restoration commonly involves some crack and chip repairs, using resin fillers. Once we have inspected your floor, we will recommend he ideal restoration procedure.

Discover more about our Marble Polishing Nedwport service plus our extensive professional cleaning  systems or Book a Quote. 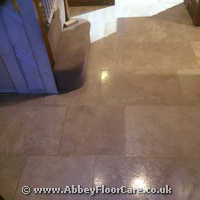 A Travertine floor has a permeable structure, with lots of holes. There are very different types of Travertine floor tiles, including polished, honed and tumbled. With time, the initial hole filler falls away, then the holes fill with unpleasant soil. 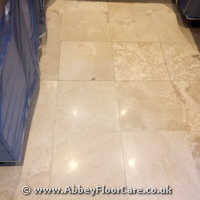 In time, Limestone will be dull and loose its finish. This damage to the surface is caused by foot traffic scratching and surface etching Eventually, your Limestone floor will have to be polished. We use industrial diamonds to remove the dmaage and marks and repair the initial surface.

Following grinding, the grout sits is level with the Limestone. An even Limestone finish is much easier to keep. There will be no grout channels to capture soil. Cracks and chips can be filled with coloured resin repair fillers. Once we assess your floor, we can recommend on the optimum restoration processes. 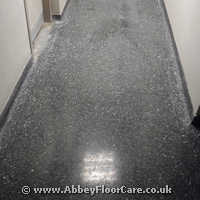 Terrazzo is made from natural stone segments set in a cement or epoxy medium which is either poured on site or precast as tiles. The initial finish on a Terrazzo floor will steadily go dull. Surface damage is brought on by traffic scratches and surface damage.

Ultimately, the Terrazzo will have to be polished to the highest standard. Diamonds are used to remove the surface damage and restore the initial Terrazzo shine. We can help reduce this soil with Terrazzo sealers. 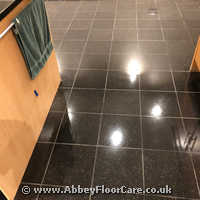 Granite is a favorite stone flooring for commercial and domestic installations. Granite is incredibly hard wearing.Granite is regularly picked because of the product's hard-wearing attributes. Specialist maintaining is usually called for less often when compared with different stones tile limestone or marble.

Granite is so hard, that lots of companies don't have the equipment or knowledge to restore granite floors. We can restore all forms of granite. to the highest standard. 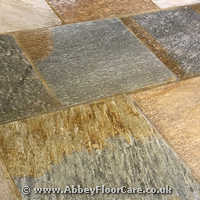 Sandstone is produced principally from quartz, iron oxide, silica and calcium based deposits so it's a very stable stone. Old sandstone can be covered with a range of old coarings and trapped dirt, so if at all possible, it needs expert cleaning and sealing.

We use a mix of machine scrubbing, hand scrubbing and pressure rinsing to get rid of all traces of old soiled sealers and clean the floor to the highest standard. Following cleaning we apply hard wearing sealers. The specific restoration needed should be based on the healthiness of your floor. 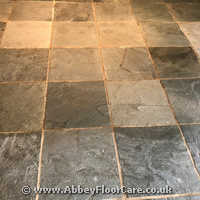 Slate is a remarkably adaptable stone which can be sealed using a range of finishes including rough surface, smooth honed or polished appearance. Cleft slate can get an accumulation of dirt in the crevices this is certainly hard to remove.

There are professional sealer removers and rotary scrubbing devices to get rid of the layers of old coatings. After professional cleaning we put on hard-wearing sealers.

If you like a smooth floor, we are able to grind the ground, subject towards the slate being suitable for grinding. 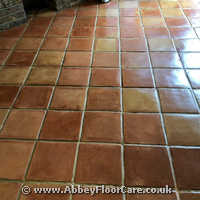 Terracotta is made from natural clay and historically has been used for roof tiles, sculptures, bricks and floor tiles.

Standard Terracotta sealers should have frequent maintenance and re-sealing, if they're not taken care of, the surface will start to get dirty and porous.

Irrespective of its vulnerabilities, Terracotta may be restored back once again to a great look.

We can re-wax the Terracotta or apply a hard wearing synthetic sealer that is much simpler to care for. 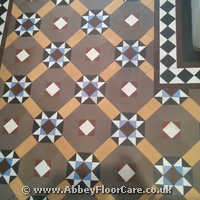 The tiles have a matt finish and acquire their colour from the clay used in their manufacture.

Along with the changes in interior decoration, these floors come with underlay from carpet, lino adhesive, bitumen and different sticky remains.

Cleaning these floors can be challenging due to all of the old sealers and residues.

A colour intensifying sealer is put on after cleaning, to displace the first colours in the tiles. Topical sealers and waxes will give the floor a sheen or glossy finish. 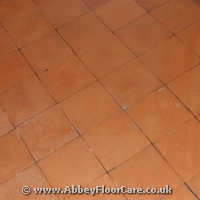 Quarry tiles are very durable but they do suffer with a number of issues.

Whilst the tiles may appear beyond restoration, these floors are remarkably resilient and can look as good as new after a suitable clean.

Professional cleaning can remove the years of dirt and old coatings, revealing a beautiful floor. Quarry tiles tend to be laid without a damp proof membrane, therefore we want to apply the proper sealer to allow the tiles to breathe. 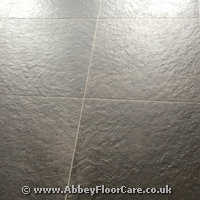 If Porcelain isn't correctly produced, the top can be absorbent similar to natural stone floors. If you've got an inferior Porcelain, the surface soil could be difficult to remove.

We can remove ingrained soil with equipment designed to get into the microscopic pits holding the soil.

Solid colour Porcelain Tiles could be ground and polished, similar to Granite or Marble.

Get more information about our Porcelain Tiles Cleaning Saundersfoot floor restoration work and our extensive professional cleaning services or Book a Quote. 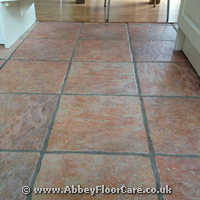 This happens because the tile surface is commonly glazed.

Expert tile and stone cleaning and restoration services will still give better results.

Discover more about our Ceramic Tile And Grout Cleaning Saundersfoot cleaning method in addition to our extensive professional stone floor cleaning systems or Book a Quote with the help of a team that works to the highest standard in stone and tile.

There in many cases are elements of natural stone restoration during natural stone cleaning. Restoring stone and tile frequently involves several procedures. All stone and tile floors suffer from wear and surface damage. The most common challenge we confront during stone restoration is fatty grime trodden to the surface causing a unexciting, unpleasant surface. Highly polished floors like terrazzo, marble and granite reveal surface damage a lot faster while the shine goes dull from traffic scratches. Wear damage eventually affects porous natural stone which include Sandstone, Terracotta, Limestone and Travertine, which are usually coated with a film-forming surface sealer.

We use resurfacing to take away surface damage due to etch marks and scratch damage. Natural stone can be ground to reveal a fresh stone surface.

Over time your floor can look unexciting and loose its luster and glow. The loss of sparkle is brought on by microscopic scratches on the stone where it has been stepped on. Polishing natural stone will be the only way to recover a shine.

On marble, Granite, Terrazzo, Polished Limestone and Polished Travertine floors, the highest standard diamonds are employed to get rid of the surface wear and rejuvenate the initial sparkle. The shine on Sandstone, Honed Travertine, Clay, Honed Limestone and Slate tiles is established by applying a gloss sealer. The most practical way to polish these tiles is through removing the old sealer and apply a brand new layer of surface sealer.

Stone Floor Cleaning Pembrokeshire
And Throughout The Country

It is bordered by Carmarthenshire to the east, Ceredigion to the northeast, and the sea everywhere else .

The county is home to Pembrokeshire Coast National Park, the only national park in the United Kingdom established primarily because of the coastline; the Park occupies more than a third of the area of the county and includes the Preseli Hills in the north as well as the 190-mile 310 km Pembrokeshire Coast Path .

Industry is nowadays focused on agriculture 86 per cent of land use, oil and gas, and tourism; Pembrokeshires beaches have won many awards .

The county has a diverse geography with a wide range of geological features, habitats and wildlife .

Its prehistory and modern history have been extensively studied, from tribal occupation, through Roman times, to Welsh, Irish, Norman, English, Scandinavian and Flemish influences .

Pembrokeshire County Councils headquarters are in the county town of Haverfordwest .

The council has a majority of Independent members, but the countys representatives in both the Welsh and Westminster Parliaments are Conservative .

Ethnically, the county is 99 per cent white and, for historical reasons, Welsh is more widely spoken in the north of the county than in the south .

Terrazzo can Be Beautiful, Colourful And Shiny 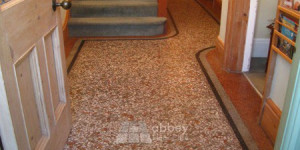 Old Terrazzo floor. Had cracks and old soiled finish. I repaired the cracks, ground, honed and polished the Terrazzo to a lovely finish. My client was very pleased with the results and recommended me to his neighbours. 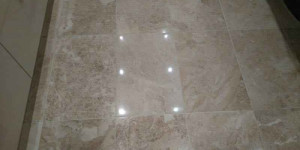 This marble floor in had surface damage from garden soil and grit. The soil was brought into the home by the family pet, who had access to the back garden. The grit was tracked in from the front driveway. The homeowner could not prevent tracked-in soil. I honed and polished the floor. I advised the homeowner that the surface would dull again, so the floor would need regular polishing. 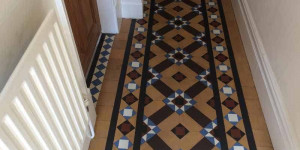 I applied our Minton Tile Cleaner and left it to work on the surface soil for around 20 minutes.

I then used a rotary scrubbing machine and scrubbed the cleaner into the surface of the floor to lift the surface soils from the stone.

I then rinsed the floor a number of times with clean water to remove all the cleaning residue.